Paternalism is a control over others, like a father attempts to control his children (Pater; Latin for father). Some control and protection are necessary because children sometimes lack the ability to make rational choices. As we mature, we learn life lessons that will hopefully protect us as adults. In other words, we take control of our own lives.

Freedom is having control over things that affect us. Studies have shown that people in control of their lives are healthier and usually more successful than those who believe their fate is controlled by others. Those “others” are often referred to as control freaks. I suppose that’s because you have to be some sort of freak to believe you have the right to force your ideas and opinions on others. Hey, isn’t that a lot of what government does?

Last week, there was some discussion here at ridernet about the MRF alert on Vision Zero. This concept, born in Europe, is an extension of paternalistic thinking as a means to protect us from harm. Vision Zero believes life and health can never be exchanged for other benefits within society, including freedom to control one’s own safety choices. 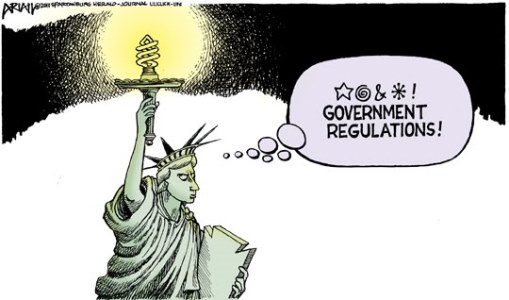 How do people become such control freaks in the first place? Psychologist James Redfield suggests that attempting to control another’s behavior is a type of neurosis, based on childhood feelings of powerlessness. That could explain a lot about some federal legislators, I guess. Now before you accuse me of not playing nice, or name-calling, don’t forget, control freaks don’t play nice either … or by any rules. It never ceases to amaze me that our side, the “leave me alone to live my life as I see fit” crowd, never tries to convince or control others to do as we do. Yet, the pro-helmet faction, for instance, always tries taking choice out of the equation while telling us to do as they do. In fact, instead of debating or arguing facts, they often resort to name-calling, suggesting those who choose not to wear helmets are unintelligent subspecies.

While we insist that we are free to make certain choices with regard to our safety, and those choices affect us alone, others will argue that if we’re injured or killed, society pays a price. The fallacy of the public burden theory, with regard to motorcycle crashes, was based on the Harborview Medical Center study. The study claimed 63.4 percent of injured riders relied on public assistance. Legislators and the general public alike were disturbed by that number. Call out the control freaks; we need to reign in those costs. But, what wasn’t highly publicized was the fact that 67 percent of all patients at Harborview required help from public funds, meaning riders were less likely to need help than others. Also, riders generally paid higher insurance premiums than others, while being less likely to rely on public programs like Medicare or Medicaid.

Nineteenth century British philosopher John Stuart Mill put this question to rest when he wrote, “… the only purpose for which power can be rightfully exercised over any member of a civilized community, against his will, is to prevent harm to others. His own good, either physical or moral, is not a sufficient warrant. He cannot rightfully be compelled to do or forbear because it will be better for him to do so, because it will make him happier, because in the opinion of others, to do so would be wise, or even right.... The only part of the conduct of anyone, for which he is amenable to society, is that which concerns others. In the part which merely concerns himself, his independence is of right, absolute, over himself. Over his own body-mind, the individual is sovereign.”

Having been in the game for so long, I understand that control freaks hate when others know what’s best for them. It has become an obsession for some to target riders for control, perhaps because of our staunch resistance to such interference in our daily lives. We’ve been much more successful in our efforts to frustrate government mandates than others have been, and maybe those neurotic tendencies are boiling over in the minds of certain legislators who grapple yet again on how to control us.

For those of us who have been in the arena for decades, it’s sort of like Deja Moo; the feeling that you’ve heard this bull before.

Riding a motorcycle is considered risky behavior (usually by those who don’t ride), but it’s a risk we enjoy taking because we love to ride. Certainly smokers shorten their life expectancy, but they’re willing to accept that risk in trade for the pleasures smoking brings to them. It’s universally accepted that smoking results in heart and respiratory disease and claims many thousands of lives each year, much more than motorcycle crashes. But in the case of cigarettes or alcoholic beverages, another health risk, the regulatory burden is put on the manufacturer, not the consumer. Those who accept the health risks of smoking or drinking alcohol are free to make those choices without government interference. Smoking bans at public places are designed to protect others from second hand smoke, not the individual.

The words freedom and liberty are often used in debating the issue of over-regulation.  The word liberty, the Supreme Court stated, means something more than freedom from physical restraint. "It means freedom to go where one may choose, and to act in such manner … as his judgment may dictate for the promotion of his happiness … [while pursuing] such callings and avocations as may be most suitable to develop his capacities, and give to them their highest enjoyment" (munn v. illinois, 94 U.S. 113, 4 Otto 113, 24 L. Ed. 77 [1876]

While we insist on our right to make personal choices regarding our own safety, as long as no other person’s rights are affected, the government continues to consider options that oppose choice while proscribing conduct through command and control regulations.

It is important that each of us remain vigilant and oppose such regulations or ideas such as Vision Zero, which ultimately could eliminate motorcycles from future transportation plans.