Chester Zawalik, of Brookfield, Wisconsin claims to be the oldest living Harley-Davidson rider in the world. He turned 100 years old on August 19, 2014 and still rides his 1981 Harley every day he can. He’s owned Indians and Harleys all his life and started riding when he was 16. 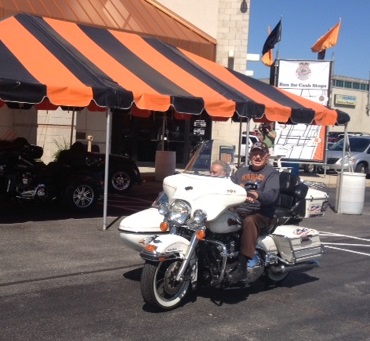 He wrenched on all of his bikes but admits the new bikes with the modern electronics are beyond his skill as a mechanic.  He’s never broken any bones, never received a speeding ticket and only visited a doctor a handful of times. He drinks 6-7 cups of coffee a day but stays away from alcohol. He has oatmeal every morning for breakfast and loves hamburgers. He’s never had a motorcycle accident and wants to keep it that way. He also likes giving people rides in his sidecar, and gave Attorney Michael Hupy of Hupy and Abraham, S.C. a ride last year at a local dealership.  Chester says he lives each day as if it’s his last, meaning he starts each day with a smile on his face and enjoys life without reservation.