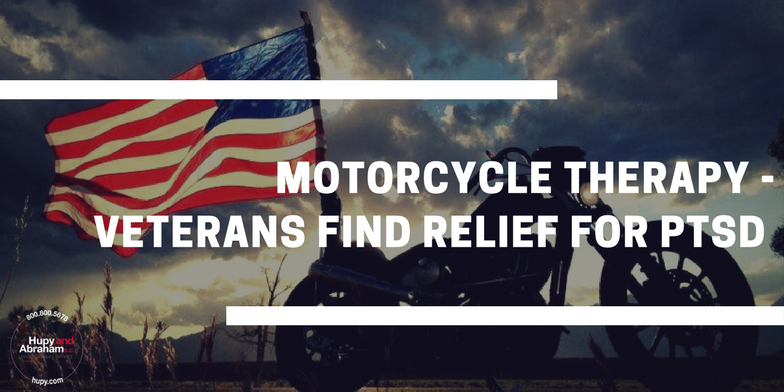 PTSD is an ugly word. It's one that's rarely discussed and even less frequently addressed. Every year, thousands of veterans come home silently carrying a burden that the rest of the world can’t see. Every year, the U.S. loses roughly 8,000 veterans to suicide. That's 22 lives per day, one every 65 minutes.

With one in three returning troops being diagnosed with serious PTSD symptoms, it’s heartbreaking to learn that less than 40 percent of them ever seek professional treatment, and that out of that 40 percent only half receive "minimally adequate" care. Fortunately, a new form of supplementary treatment is gaining ground, one that involves a throttle twist and an open road.

Oconomowoc, WI resident Staff Sergeant Falls served in the 54th division ground forces for two tours. During that time, he saw more than he ever expected.

“I pictured like what it would be like in the movies … but it was quite a different experience,” Falls said, citing the most disturbing thing during his service was the almost constant uncertainty of his and his team’s survival.

After returning he recalled how out of place he felt, “At first you don’t realize how messed up you are because you’re surrounded by guys that have lived through what you’ve lived through. We pretend we’re okay, but it catches up. You can’t hide from it any more, it disturbs your performance at work... and more importantly your relationships at home.”

The symptoms that Falls experienced are classic ones. Technically an anxiety disorder, PTSD can occur after a traumatic event in which intense fear, helplessness or horror is experienced, and/or where the chances of safety and survival are unpredictable. Symptoms include: reliving of the traumatic event, exaggerated startled responses and feelings of emotional numbness or extremes. Relationship damage is also considered a serious side effect of this disorder. For troops suffering from combat trauma, two out of three marriages are failing.

Traumatic brain injury has been linked to PTSD presentation as well. According to the New England Journal of Medicine, 44 percent of soldiers who reported an injury that caused a loss of consciousness had PTSD three months after returning home.  Symptoms typically emerge 3-4 months after returning from deployment, though they can also occur years later. Treatment can be difficult, range from cognitive to chemical, and often includes some form of re-exposure to the event.

“Seeking help was hard. Sometimes it’s easier to stare down somebody with a gun than to deal with your own problems,” Falls recalled.

The stress of prolonged treatment combined with feeling alone in their experiences often discourages veterans from continuing. However, gaining traction now more than ever is a new form of encouragement for PTSD sufferers. “Motorcycle Therapy” is a form of supplemental PTSD treatment that offers the chance for community and support.

Riding offers vets the chance to refocus their mental energy to a positive outlet. While riding you have to be aware, constantly processing, a side effect which many PTSD patients said they find soothing.

“I’m very hypervigilant, riding channels that energy. It allows me to relax,” said Falls, who is also a motorcycle club member.

The ability to join motorcycle clubs also offers veterans a sense of community. That support is vital in overcoming any challenge, and for many vets the brotherhood helps immeasurably in that process.

Motorcycles can mean many things to many people. For some they’re an outlet, to others a challenge, or even art. For those suffering from PTSD symptoms, motorcycles can offer a heavily needed quiet in the storm.

“My bike is my lifeline,” Falls says.

Today, suicide rates continue to remain high, with the number of active military members taking their own lives now eclipsing those lost in battle. Thankfully, PTSD awareness and veteran mental programs such as the V-Twin Project, 22Kill, and Project 22 are gaining traction to promote awareness and provide those who serve our country with another alternative.

At Hupy And Abraham, S.C., we support a variety of motorcycle causes and organizations. No matter what you ride, safety and unity are important. Support the sport and order your free "Watch For Motorcycles" sticker here.