The day’s route took riders across Missouri, starting in Cape Girardeau and ending in Springfield. Elevations were 300 to 1700 feet. 91 bikes lined up to start, but one never made it out of the parking lot so it was disqualified.  Seven bikes dropped out of the race and 17 are undergoing repairs or waiting for parts.

My husband, Tony Pan, rode to Cape Girardeau to bring me some much needed electrolyte tablets. I depleted much of my supply during the hot days following the start of the ride. He stayed on to help with medical support on the way to Springfield. We watched for a thumbs-up from riders who pulled off the road, signaling it was ok for us to continue past them.

At mile marker 3, #34, Peter Reeves, was having magneto problems. At mile marker 8 we found #16, Chris Knoop, working on his shifter again. Along the way, many more riders were assisting fellow Cannonballers or waiting for support crew to pick them up.

At the first gas stop, everyone seemed to be in a great mood.  Cris Sommer Simmons was the only member of the Honeymooners team still competing, and was joined by two other riders.

They said that since she was the only Honeymooner left, they would just call her Honey. She teased right back calling them the odd couple. I snapped a picture of them all, and decided to call them “Honey and the Mooners.” 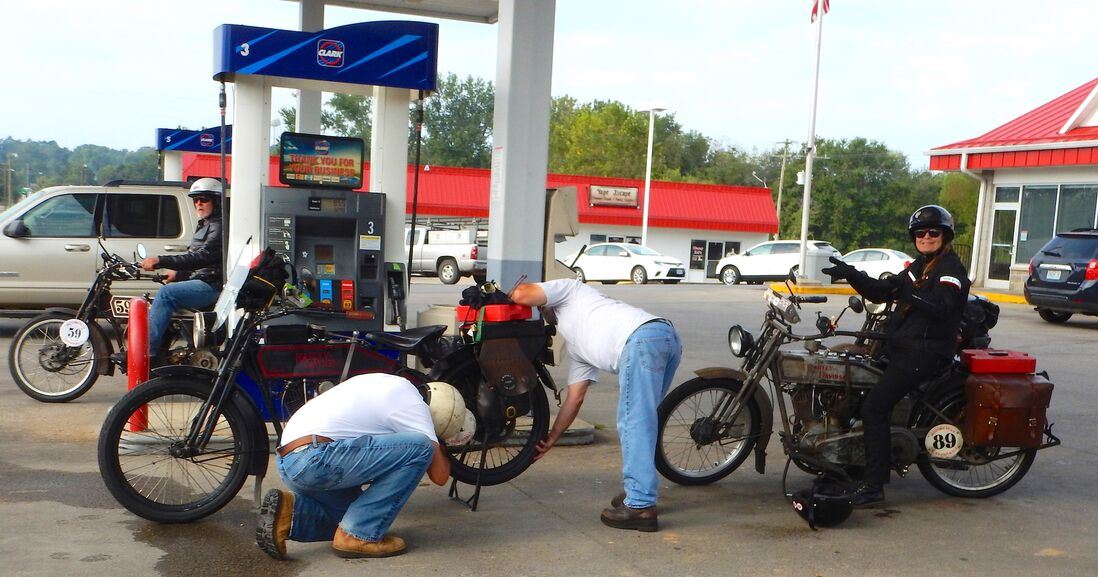 Highway 34 is a beautiful road with many curves and new blacktop. Eventually the route turned on highway 60, a four-lane, 65 mph road that completed the last 150 miles of the journey to Springfield. That last leg of the route was plagued with intermittent storms that thoroughly dampened most rider’s spirits. Pan and I decided to ride through the downpour to see if anyone needed help. We found #103, Steve Alexander, fixing a slipping drive belt. Pan and I held a large plastic garbage bag over him while he worked, since he didn’t have any raingear with him.

Another mile further and we found #78, Clint Funderberg hanging out under some trees. The rain was not very friendly to his magneto or his cell phone. We called for the transport team and continued on.

17 bikes arrived in Springfield on the trailers. The parking lot was alive with activity under the beautiful Harvest Moon. 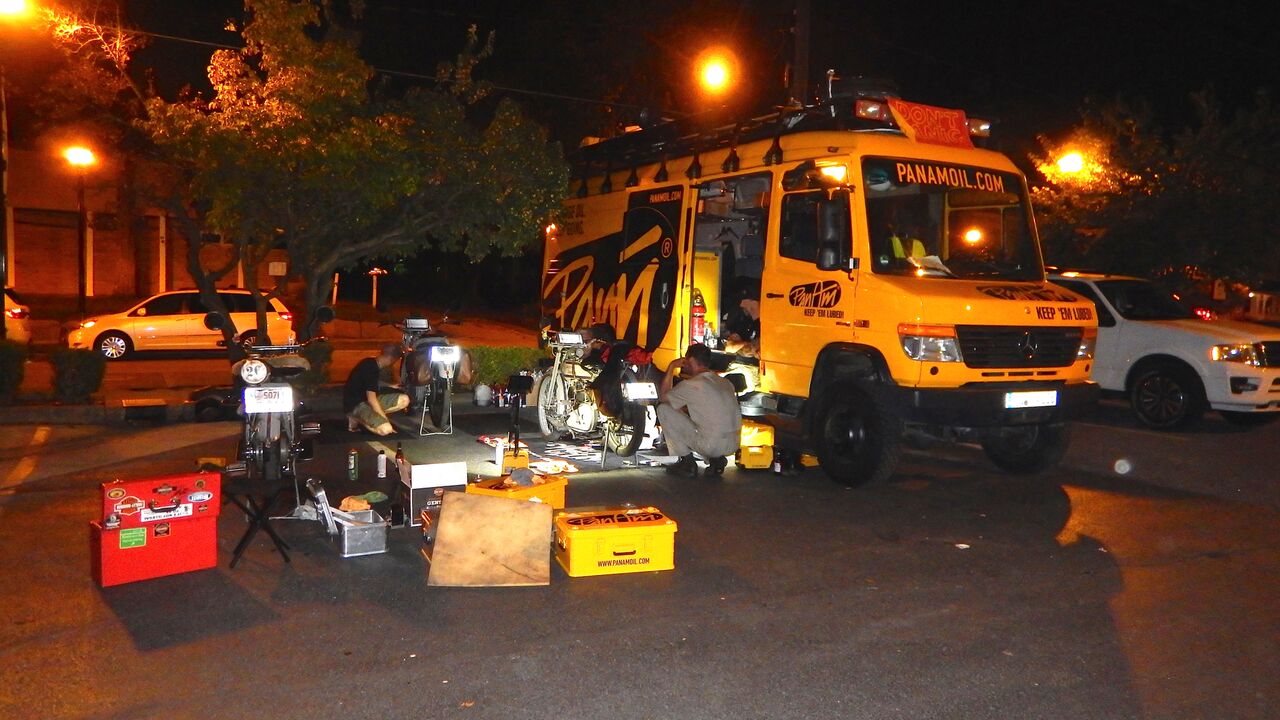 Tony left the parking lot of the hotel this morning, heading back home after meeting me in Cape Girardeau. He stayed overnight, riding support with me on Thursday to Springfield, leaving on Friday morning.

A cloud of blue smoke rose from the parking lot outside of the University Plaza Hotel in Springfield, MO, as Class 1 riders fired their vintage iron to life.  Rumors were that we were going to see more rain today, which was not welcome news.

The route out of town took us past historic sites on Route 66, and riders frequently pulled alongside of the road but no one seemed to be having major problems. 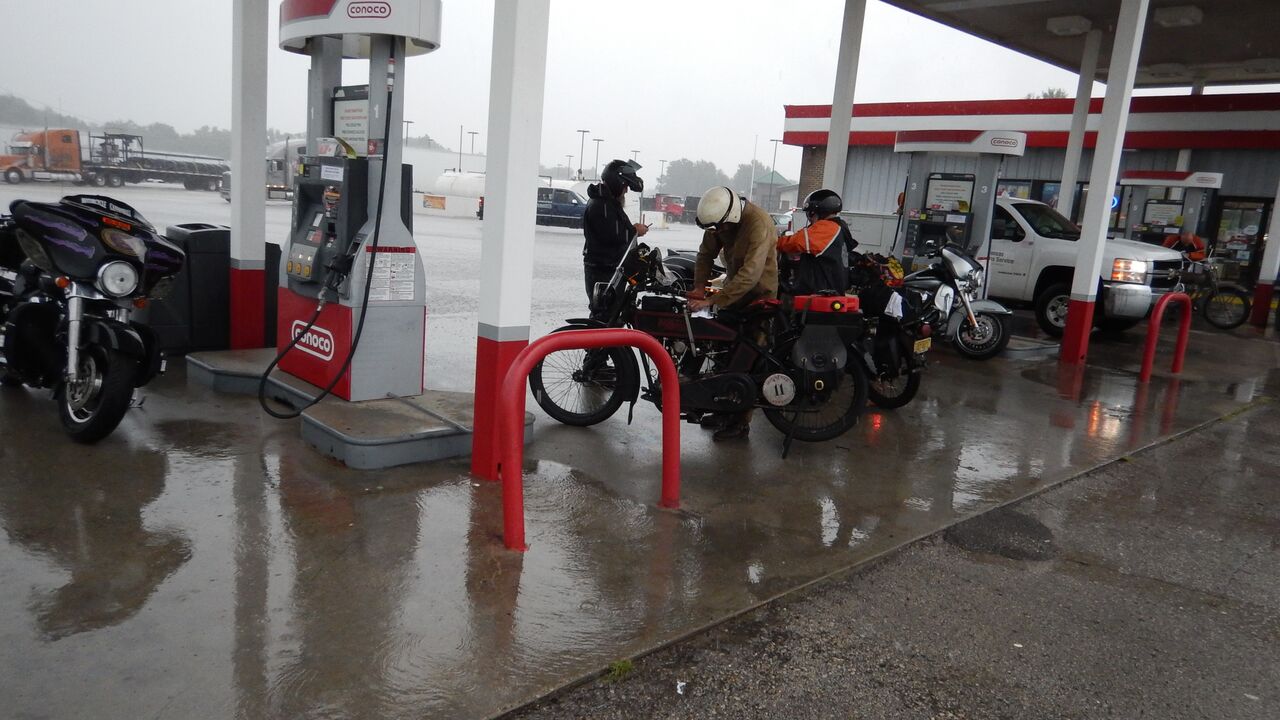 At Mile Marker 20, riders stopped at an historic gas station to put raingear back on.  We guessed we were going to get wet and we were right. The next 100 miles was mostly rain, and near mile marker 35 on Hwy 39, I came upon a crash. One of our support crew was directing traffic and a bike was on the side of the road, upright with no damage. I asked if I was needed as I rolled past a pick-up truck and Bruce said “yes.” I could see a car buried into the back of the pick-up and parts spewed all over the road. To my relief, none of the bikes were involved. I started assessing the people in the car for injuries, assigning tasks to bystanders, and called the EMS to let them know we had four injured but nothing that appeared to be life threatening. I was relieved to see that Darlene Jones, a recently retired ER nurse riding in the support truck, had arrived and was helping the people in the pick-up truck. After the ambulance transported the injured, I spoke to Harry Verkull, rider #57 from Scotland, who advised that if the car driver had veered to avoid the crash, she would have certainly collided with a number of bikes. He stayed at the crash scene to give a statement to Sheriff’s deputies. I thanked God that no riders were hurt in that crash. 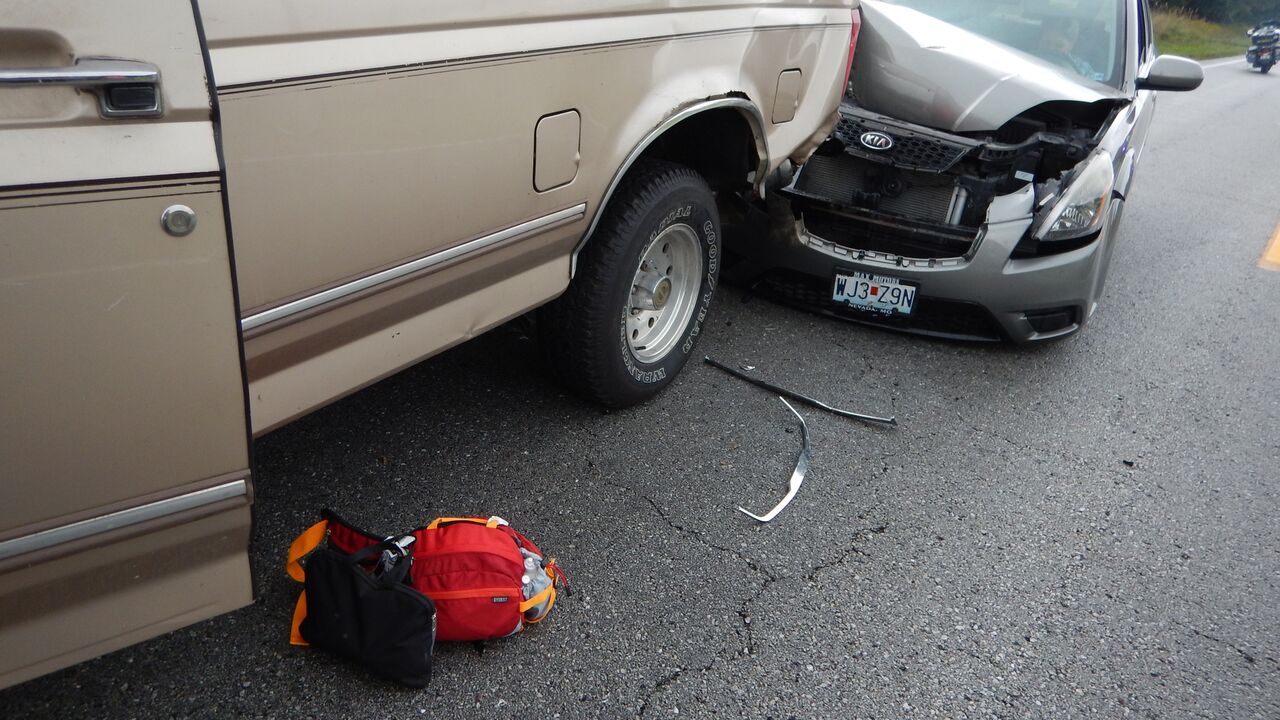 Upon arriving in Parsons, KS, cold and wet, it was announced during a lunch provided by the town that all riders would be allowed to call their support teams to transport bikes to Wichita. The torrential rains and cooler temperatures dictated that safety take precedent over the completion of the day’s ride, which involved another 110 miles to the ending location.

Some riders, including Doug Wothke, Shinya Kimura and Scott Byrd decided to continue riding  I stayed with Scott as the weather cleared up and we had a nice ride to Augusta for the much anticipated visit to the Twisted Oz Motorcycle museum owned by Kelly Modlin, #24. We all decided that he wins, hands down, for hosting the best dinner ever on the Cannonball. A complete meal with Porterhouse steaks and Tilapia, corn on the cob, baked potatoes, cookies and ice cream satisfied everyone.  Gift bags were handed out to each rider with local goodies. The museum is a wonderful mix of old bikes and cultural artifacts. They are expanding to accommodate more motorcycles. If you ever get to Augusta, visit this free exhibit. Vinnie Grasser from Florida and Chris Knoop from Australia joined me for the final 15 miles to the hotel. They looked like little boys on their toys with smiles from ear to ear. Thanks guys for making my day.

The stress seems less this morning as the riders headed out on a mostly flat course of only 184 miles from Wichita, KS to Dodge City.  67 riders got a later than usual start (9:00) which gave people a chance to eat breakfast, take showers and dry some of their clothes. We left on a 6 lane freeway which is always a bit interesting as the bikes mix with traffic. At mile marker 23 I found the first bike pulled over. Anthony Rutledge, #11 was just tightening his kickstand to avert potential disaster. Vibrations can shake things loose on these old machines. The terrain was flat with an occasional tree beckoning riders to seek shelter from the hot sun.

The long stretches of road gave me great opportunities to get pictures of riders. I leave after everyone else has gone out on the course and then I pass the riders to get ahead a little bit so I can stop to help and fall back again. I do that leap frogging all day. After lunch, a freight train with graffiti afforded a wonderful backdrop for some photos. Then, some road art on a fence in Mullinsville prompted Scott Byrd and John Neuman to pull their 1916 Harley’s over next to a fence for some fun pictures. I stopped for Steve Alexander from Georgia, who was having trouble with his 1913 Douglas. After an oil change and belt adjustment, a push start got him back on his way. 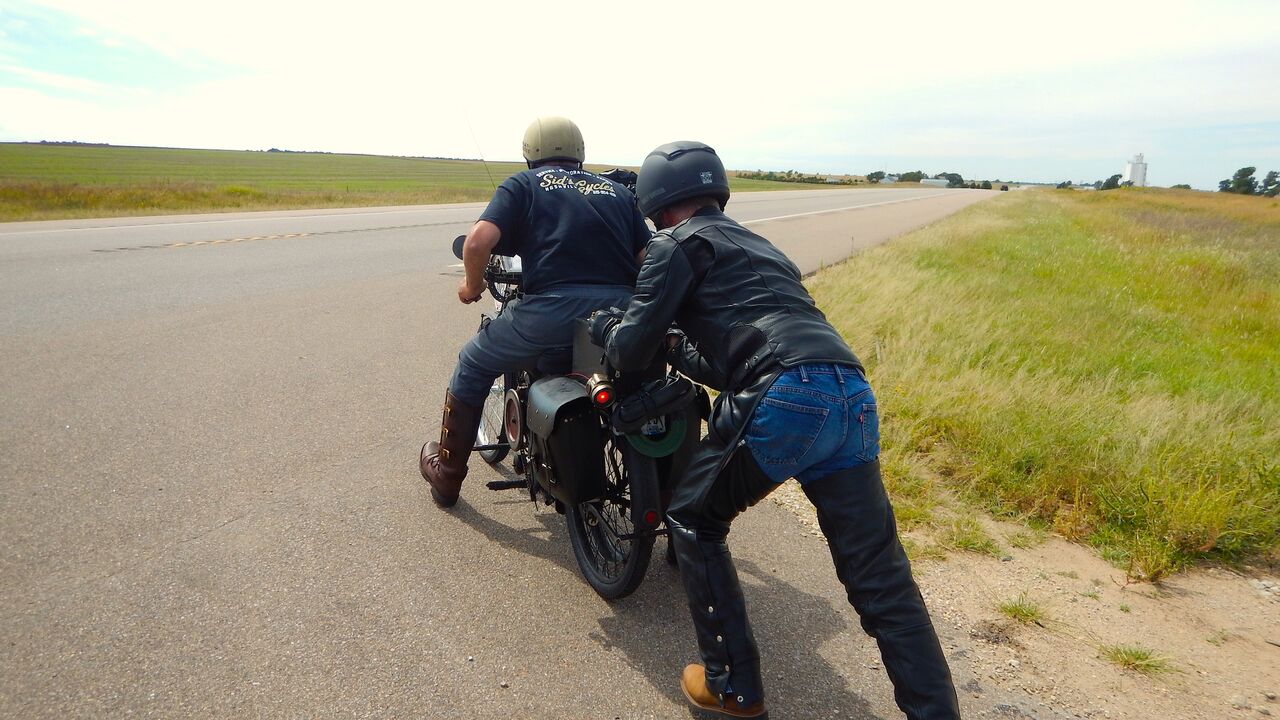 I knew we were getting close to Dodge City when I saw street signs like Outlaw ridge and Wyatt Earp Parkway. Dodge City hosted a reception and dinner at Boot Hill, which included chicken fried steak, mashed potatoes and beans. The town was excited about the Cannonball having their day of rest here and so were we. Relaxing before riding to Colorado, and desert country afterward was much needed.

Always welcome is a little comic relief. A couple of riders got stuck in the hotel elevator and needed the fire department to get them out. I set up Spitfire’s Free Clinic in the lobby of the hotel, welcoming walk-ins,  but ended up making house calls until 9pm. The sunset was beautiful and the night air perfect for standing around the parking lot talking about bikes and adventures. Sunday is a rest day for everyone. A chance to catch up on sleep, do laundry, make some repairs or adjustments, or just kick back and enjoy the day.  I love this gig. 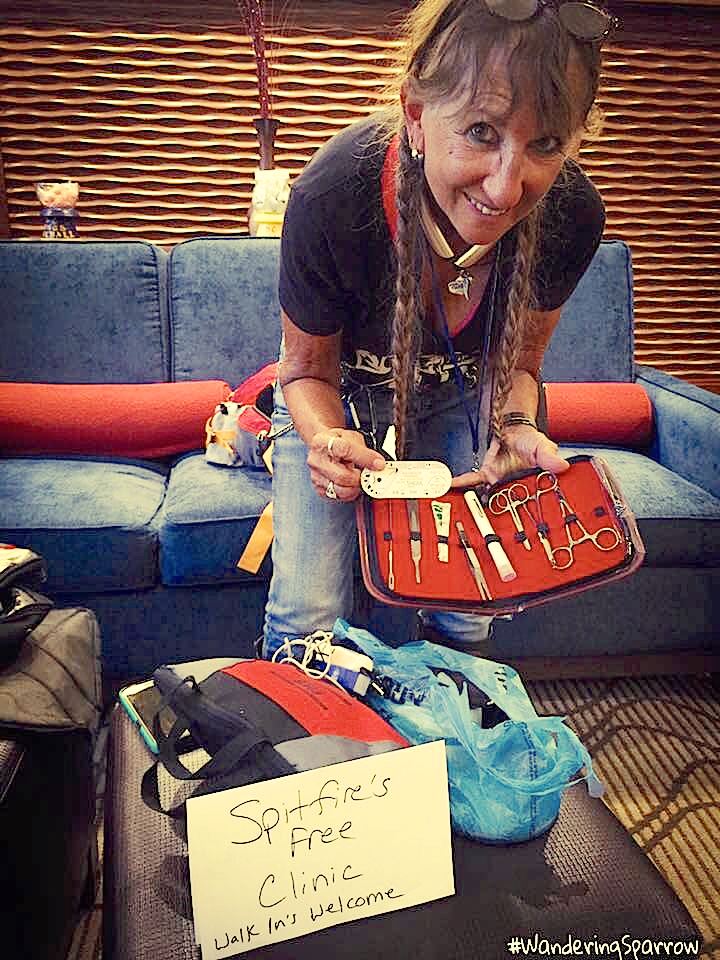 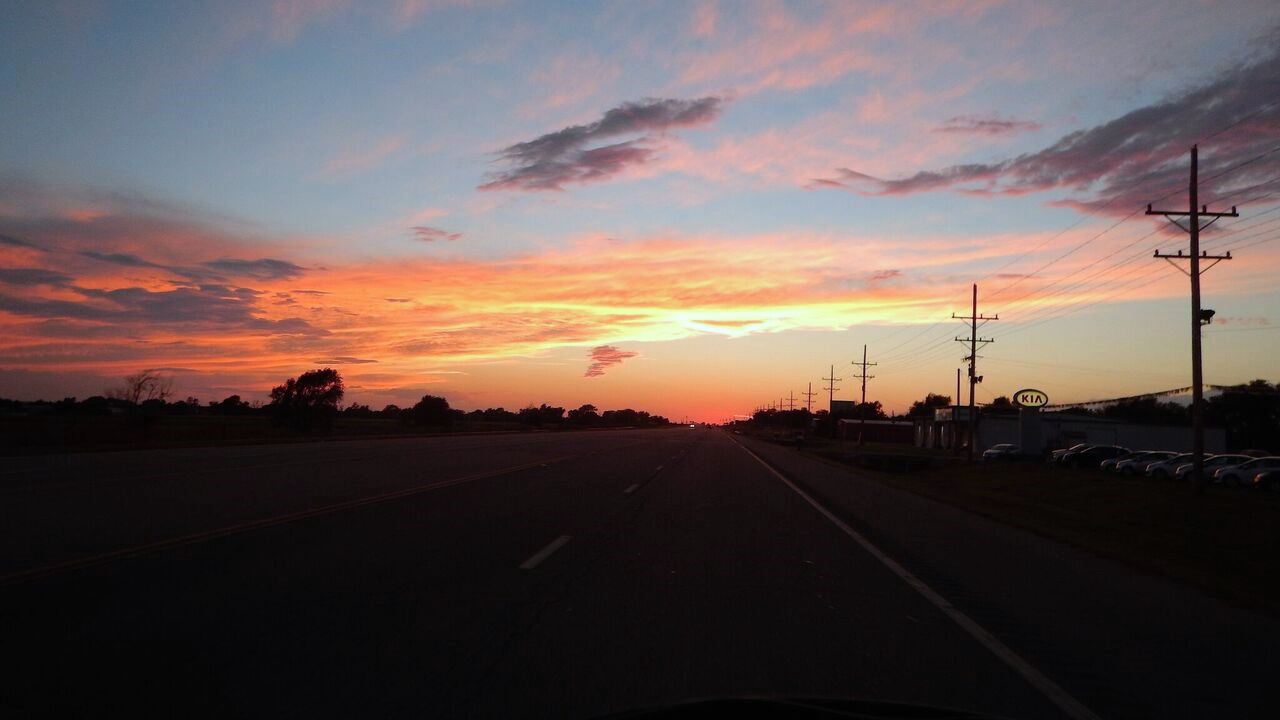