There was a different energy in the air this morning. The day before had been long, hot and grueling. Today we travel 264 miles and will reach an elevation of nearly 11,000 feet as we cross Wolf Creek Pass in the Rocky Mountains. The person in first place, #13, Dean Bordigiori from California, was at the start line early making last minute adjustments. Doc Hopkins, #52, who has all of his miles in for each day, told me that he had lowered his gear ratio to help climb the mountain passes. 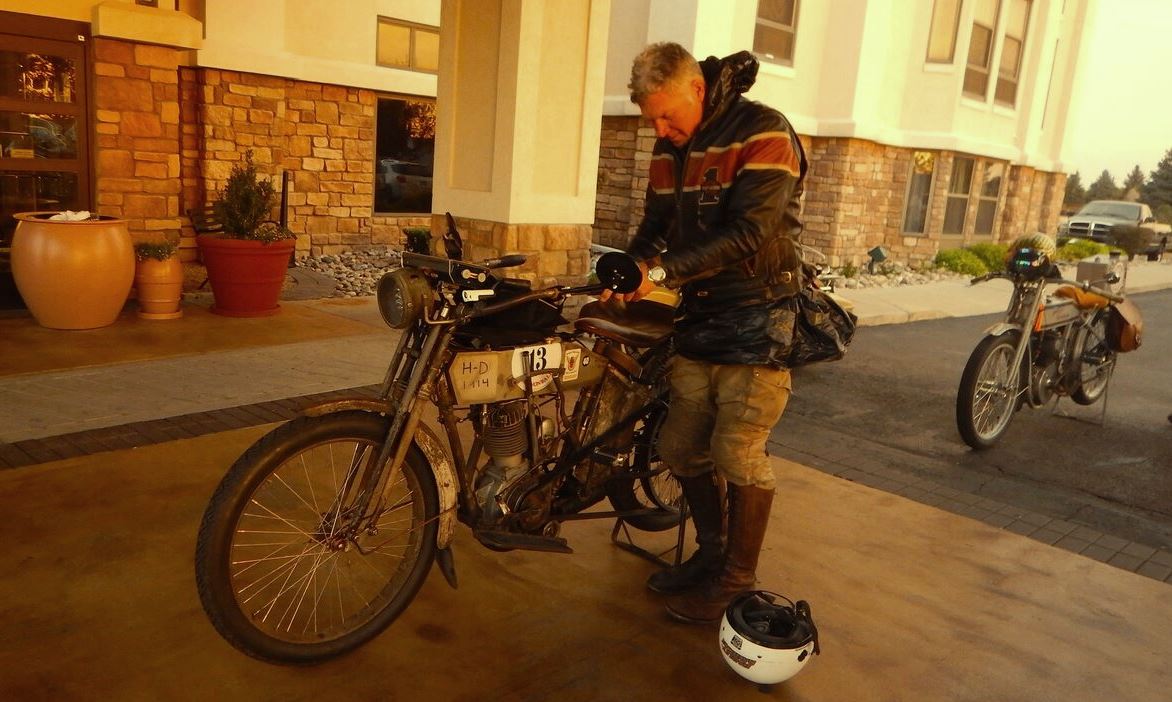 The sunrise promised a beautiful day but I’m not sure anyone else noticed. Shawn Duden, #39, who rode in  Cannonball 2014 (the chopper guys), arrived with the bike that he and Bill Buckingham built for the Cannonball.  August 27th, Bill was hit and killed in a motorcycle crash. Shawn was there to honor his friend and ride the bike for a day. I saw people crying, laughing and shaking with nervous anticipation.

At the first stop sign, Linda Monahan, a rider who had struggled to get her bike running and on the course today dropped her bike and could not get it started again. That was a prelude of more problems to come. The riders entered Interstate 25, and on the first long uphill grade I saw someone pushing their bike. He was calling for help and obviously out of breath. I offered to help push but he had decided to wait for the trailer.  Just beyond him was another rider being helped and by mile marker 30 two more were broken down and unable to fix their bikes. It was going to be a long day. Seeing the mountains off in the distance was both soothing and ominous. The riders stop about every 50 miles for gas, and at the first gas stop people were talking about how they heard we have 34 miles of “hell” up ahead. The first section was a 9 mile, 1,800 foot climb to La Veta Pass, elevation 9,413 feet.

For my 2008 Street Glide, the sweeping, wide, newly blacktopped mountain climb was beautiful. The cut rock and smell of cool mountain pine scenting the air was welcome after the heat soaked, boring ride across the flat lands of Kansas.  I stopped at a gas station on the other side of the pass and watched the riders come in. I was looking for fatigue and possible breathing problems due to the altitude. I saw a rider struggling to move his bike to the pump. He said he was exhausted and his breathing was labored.  A check with my oximeter showed an oxygen saturation of only 85 percent.  I gave him some canned oxygen while he ate a granola bar and he looked better after 10 minutes and was ready to continue on.

We had a hosted lunch today put on by the Chamber of Commerce in Alamosa, CO at Cole Park. Paul d’Orleans was staging bikes for pictures. He does a special “Old school” type of photography called “Tin Type”.  As #18, Doug Feinsod was exiting the grassy area where pictures were being taken, his bike slipped off a wooden board and the bike got hung up. Eager locals jumped into action to help lift the bike off the board. No damage, whew! 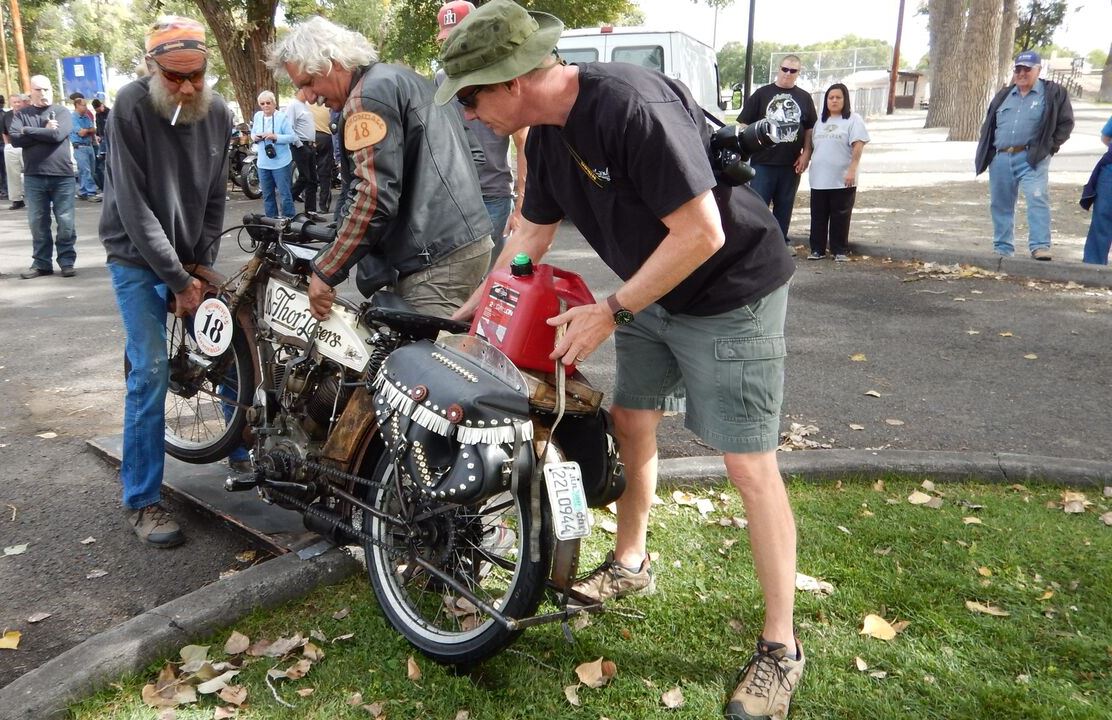 The bikes headed off to the Conoco Station at mile marker 162 where bikes were allowed to trailer, with no penalty, other than the 22 miles over Wolf Creek Pass. Only six riders opted to do that. Most riders stopped to gas up since they were burning more gas due to the steep inclines. I found the guy who had been struggling earlier, sitting down and looking exhausted again. This time his oxygen level was better. He had an energy drink but was not feeling better. I suggested a candy bar for a shot of sugar to the brain to get over the pass, and that seemed to work out fine for him.

As I was getting ready to leave, a man approached me in his plaid shirt and overalls. He introduced himself as “Turtle,” said he is running for president, and in a southern drawl said he got 100 votes today just going to buy a pack of cigarettes. “Be sure to write me in, I’m on Facebook too,” he explained.  As I pulled away he proclaimed, “Vote for Turtle, the no nonsense candidate.” I love the people I meet on this ride.

We rode through a few tunnels cut into the mountainside, and as I came through the second tunnel I saw Dean, #13 pulled over to the side.  Support staff members Polly and Joe Sparrow were with him. I pulled over with my strobes on and found Joe squirting water on the severely overheated clutch on Dean’s bike. Dean was a little short of breath and said he planned to push the bike to the top of the summit. We were about one and one-half miles from the top. I gave him a can of oxygen and Joe stayed with him until he felt better. 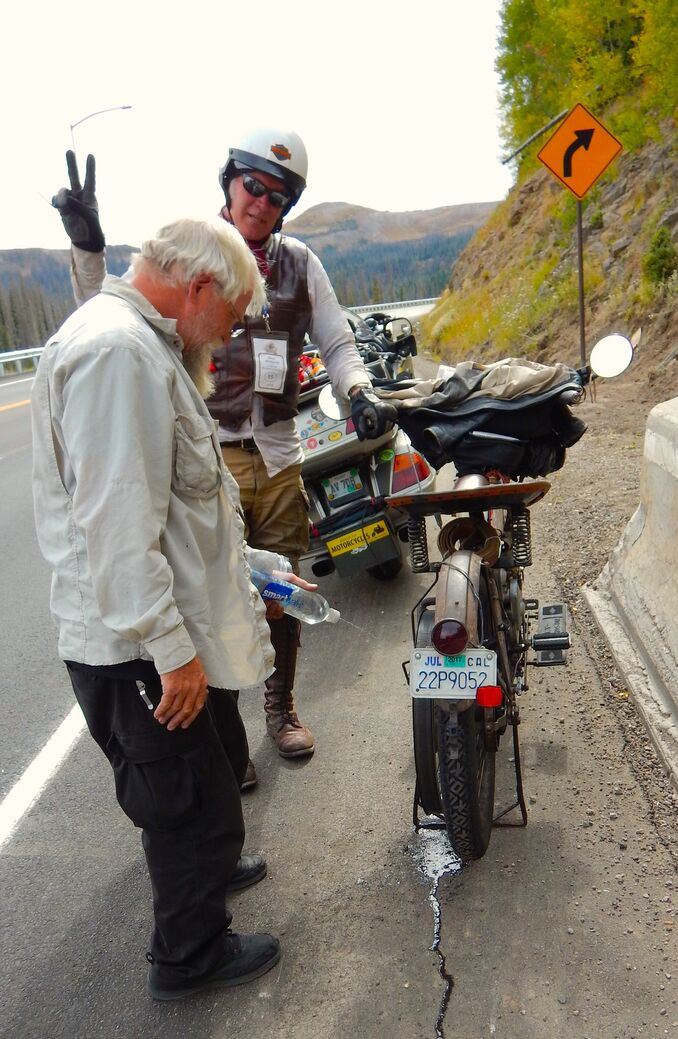 People were excited as they hit the summit and most had already achieved this goal by the time I got to the top, since I was riding near the tail-end of the pack.  But it was fun to see the excitement on the faces of those few riders behind me as they conquered the beast. The next challenge, eight miles of seven percent downhill grade, with winding scenic overlooks.  This was yet another adrenaline rush as I watched the truck runaway ramps for anyone whose brakes failed and might be in the soft sand. Nope, all clear.  I stopped at a gas station and waited for Dean to catch up, and to be sure I was once again at the back of the pack.  Another 60 miles and we’ll be in Durango.

About 20 miles from Durango I saw a bike pulled over with a helmet and gloves on the seat.  The lights were still on and I looked around to see where the rider might be.  I didn’t see him anywhere. I saw a gas station a couple of blocks away and thought maybe he went there for gas but his gas can was still on the bike.  Just then I heard a man calling to me. “Are you looking for that man,” he asked.  He directed me to a nearby restaurant where I found #1, Hans Cortese.  He was pale and said he felt faint so he got off of the bike.  Someone took him to the restaurant. He kept saying, “Help me finish, I need to get back on the bike.”  I suggested he have some sugar and a little girl at the restaurant offered him her skittles. 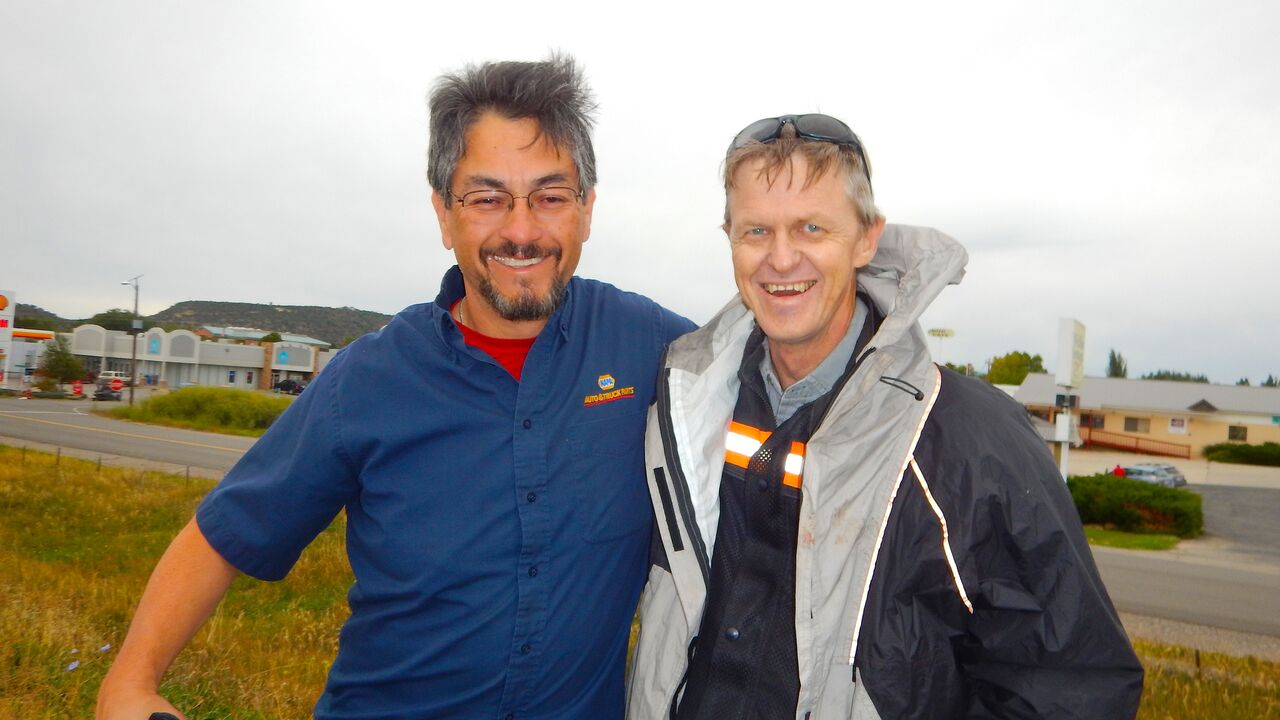 Hans Coertse and his Good Samaritan

The Good Samaritan who had been helping him drove him back out to his bike. He said he was feeling better, got back on, went a few blocks and got back off and lay down next to the road. I told him I thought we should load his bike and get him to a hospital, but again, he disagreed. After 5 minutes I followed him in to the finish line. His family had just flown in from South Africa and was waiting there for him. While some riders took care of his bike, Hans and wife were driven to the hospital emergency room with me following on my bike. He was severely dehydrated. Hans gave me permission to share information about his condition and to encourage all of the riders to take time to drink water and take electrolytes.  He was kept overnight and I left the hospital, arriving back at the hotel after 9pm. Vern and Tanner saw me come in and ordered wonderful chef’s salad for me. I love this crew. Right now, they are my world. I wonder what tomorrow has in store?