Former Wisconsin State Senator Dave Zien was injured on March 13, 2011 in a motorcycle crash on Interstate 10 near Marianna, Florida.  According to the Florida Highway Patrol, Zien tried to take evasive action to miss a SUV that lost control and overturned in front of him. Zien was unable to avoid hitting the roof of the car and sustained serious injuries to his leg. He was flown by Air Heart Helicopter to Tallahassee Memorial Medical Center where surgeons amputated his injured leg just above the knee. The SUV driver was cited for failure to maintain lane and driving with a suspended license.

Who Is Dave Zien?

Zien is making a slow and steady recovery from the crash that nearly ended his life. And what a life; born March 15, 1950 in Chippewa Falls, Wisconsin, he began riding motorcycles as a teenager. He's a Vietnam Combat Veteran (1968-70) and after his service to his country he served the motorcycle community as a member of ABATE of Wisconsin and Vice-President of the Wisconsin Better riders Association.  He was elected to the State Assembly in 1988 and served there until 1993 when he resigned to run for the State Senate. He served in the Senate as the Minority Caucus Chair in 2001, Assistant Majority Leader in 2003 and President Pro Tempore in 2005. As a legislator, he authored every positive piece of motorcycle legislation.

Dave Zien was inducted into the Sturgis Motorcycle Hall of Fame, he is an Iron Butt Association member, and he owns over 100 world records in endurance riding. In 2009, Dave Zien completed one million miles on the same motorcycle, his 1991 FXR. On April 4, 2009, he rode into the lot of Hal's Harley-Davidson, New Berlin, Wisconsin, to the cheers of hundreds of supporters. Hupy and Abraham S.C. sponsored his attempt at this world record and Attorney Michael Hupy rode into Hal's on the back of the Million Mile Motorcycle while his partner, Jason Abraham rode next to Zien.   On April 6, 2009, Harley-Davidson Motor Company presented Zien with a brand new Road Glide in recognition of Zien's accomplishment of logging one million miles on a single motorcycle. That FXR is on display at the Sturgis Motorcycle Museum in Sturgis, South Dakota. The 2009 Road Glide is the bike Zien was riding when he was injured in Florida. The bike has over 230,000 miles on it and Zien was hoping to log one million miles on that bike also. It appears that won't happen but Zien is not planning on giving up riding.

In typical rider fashion, three things are most upsetting to Zien. First, he is concerned that his beloved Road Glide is a total loss. Second, he cannot locate his Crazy Horse commemorative belt buckle. That was a present to him from Hupy and Abraham S.C. investigator and long time friend, Tony Pan Sanfelipo. Tony gave Dave the buckle because Dave was best man at his wedding to Vicki Roberts on top of Crazy Horse monument. Dave has worn the buckle every day since June 26, 2002.  Last, Dave cannot locate his "colors" from the Lawmakers, a motorcycle organization founded by Sen. Ben Nighthorse Campbell. Both he and Tony are members of the Lawmakers.  In a phone conversation to Tony's wife Vicki, Dave talked about losing these three items but never mentioned his leg.

Former Wisconsin State Senator, Dave Zien appeared at Graybeard Productions' 6th Annual Bike Show at South Park in Oshkosh, Wisconsin, June 4-5, 2011. This was his first major outing since losing his leg in a horrific motorcycle crash in Florida in March. After spending several weeks in the Tallahassee Medical Center and Rehabilitation Unit, Zien came back to Wisconsin to continue in his recovery. 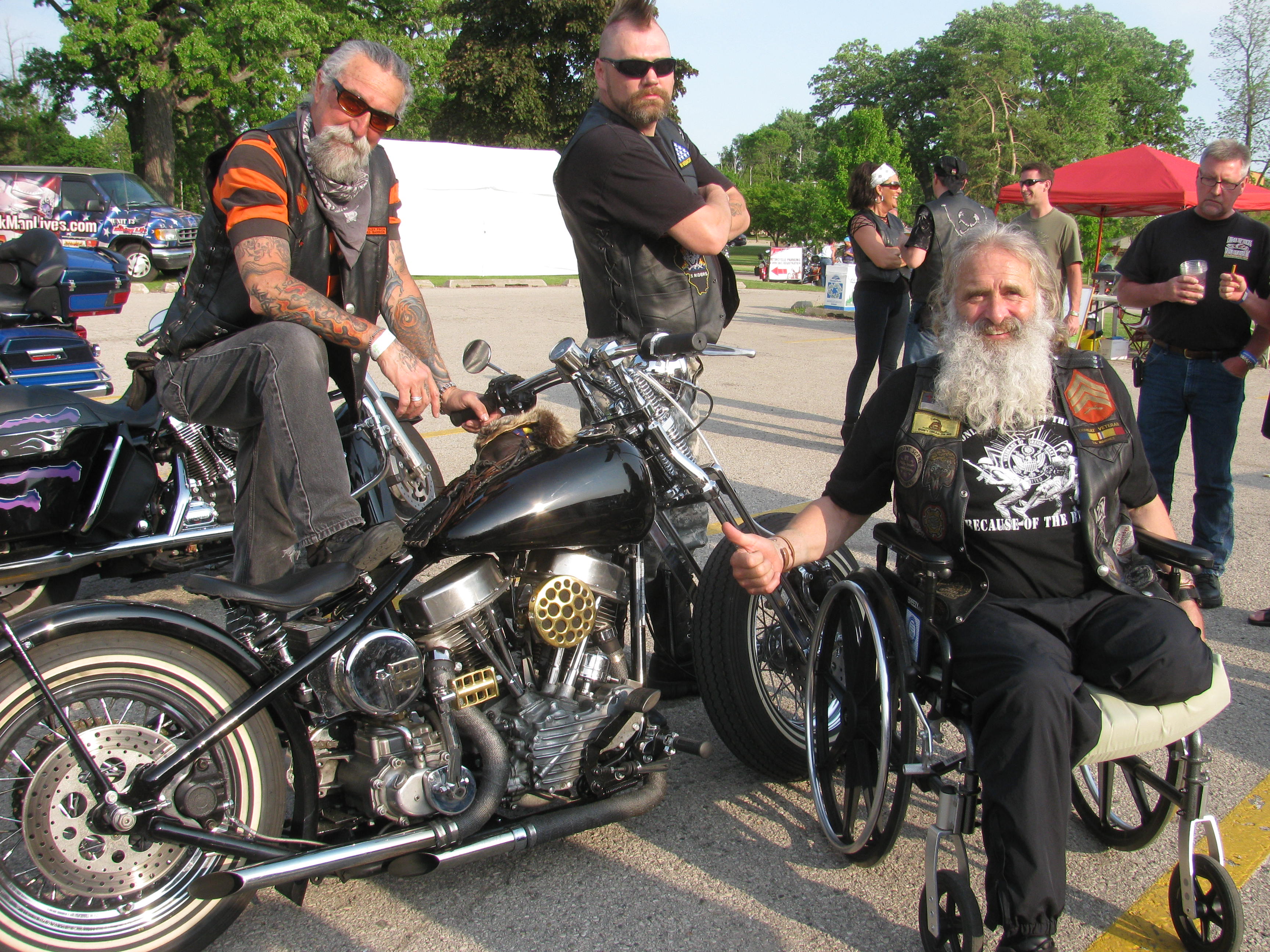 At the Graybeard Promotions Bike Show, Zien was acknowledged by the show promoters along with life long friend, Tony "Pan" Sanfelipo as two of Wisconsin's original Freedom Fighters. The thousands in attendance cheered as they were introduced and many in the crowd found their way to the Hupy and Abraham booth to request a signed photograph of each.  Visitors to the Hupy booth also took bumper stickers with the recognizable Watch for Motorcycles logo associated with the Hupy and Abraham law firm.

The Graybeard Bike Show raises money for Children's Hospital and both Zien and Sanfelipo were happy to participate and help that worthy cause.