Michael Farabaugh: The Passing of a Legend

It’s never easy to accept that one of our leaders has left us, yet it is inevitable that those gifted spirits can only teach us how to live and act for the short time they are among us on earth.

Michael Farabaugh was one of those leaders. Born on May 7, 1948, his time with us seems short. But in that time, he accomplished more than most leaders in the motorcycle community combined.  He served as the Executive Director of ABATE of Indiana for 12 years, was a founder of the Motorcycle Riders Foundation (MRF), a spokesperson for Lucas Oils and a Motorcycle Safety Foundation (MSF) instructor.  All of that is great, but what I most admired and enjoyed was his superb photography, especially his studio work of superb custom bikes and stunning models. His work was featured in many of the most favorite motorcycle magazines around.

I met Michael back in the early 1970s when then ABATE of Indiana Executive Director Wanda Hummel invited me down to Hoosier Haven to attend her vice-president’s wedding.  At that time he was the AMA district president in Indiana. He was a rising star in the motorcycle rights community and everyone who met him realized he would be a force to reckon with.

He became the Executive Director of ABATE of Indiana in 1978 and was instrumental in establishing that ABATE chapter as one of the strongest in the nation. When the various ABATE chapters were struggling to form ABATE as a national led organization, he, along with Wanda Hummel, Bill Gannon, Jim Rhodes and others founded the MRF, which has become the national voice representing motorcyclist’s rights in Washington, D.C. 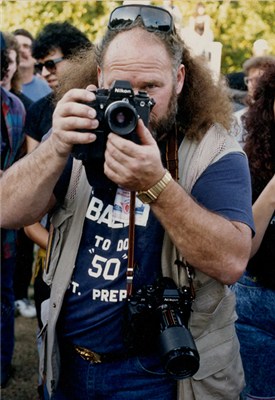 Farabaugh was always ready to help motorcyclists, especially newer riders, and his skill as a storyteller was unmatched.  When he spoke to a group, he owned the room. Storytelling, as in the Native American culture, is very important to the motorcycle community. The founding members of our rights groups have a lot of knowledge and history to share, and these stories are the building blocks of our future successes. Sadly, leaders like Farabaugh are disappearing from our ranks. The aching in our bellies should recede with the warm memories of their accomplishments. I was one of the privileged to actually know him, not as well as I would have wished, but none the less, I admired his work and contributions. Behind his strong will and forceful voice was a gentleness and compassion that truly great leaders seem to all have. He will be missed.