Dan Frantz was a member of ABATE of Wisconsin’s board of directors. His dream was for ABATE to own a parcel of land to be used for events and to benefit the membership. Unfortunately, Frantz died before his dream could become a reality.

In 2009, a fund was established in Frantz’s name, designed as a mortgage debt reduction fund.  Donations could be made by individuals or businesses to help pay down the debt on the land. After a slow start, Attorney Michael Hupy of Hupy and Abraham, S.C. presented a plan to the ABATE board of directors on how to accelerate donations. 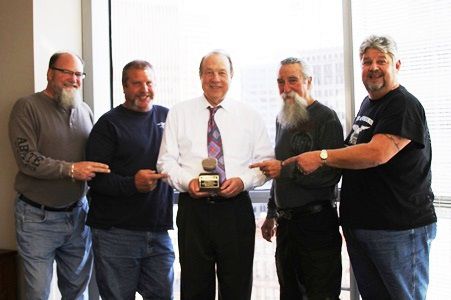 In 2010, Attorney Hupy proposed a “matching grant”   program and pledged to match the first $2,500 in donations to the fund by June 2011, the month of ABATE’s annual party the Summer Hummer. That pledge was the much-needed spark to ignite a steady flow of donations. By April  2011, ABATE was only $200 short of the goal. With a month and a half remaining before the Hummer, Hupy increased his pledge to $3,500. That alone encouraged another decisive response from the membership, and the goal was surpassed in time for the summer party.  With the increase in his pledge, ABATE received over $7,000 for the fund in 2011 instead of $5,000.

Because this worked so well, Attorney Hupy decided in July to continue with his $2,500 matching grant pledge to the end of the year. Again, because of an overwhelming response to his pledge, he increased the amount of his match each time that amount was achieved. By December, it was learned that his pledge had increased to $5,000 and that amount was surpassed by the membership, resulting in an additional $10,000 raised for the fund. Coupled with the earlier match grant total of $7,000,  $17,000 was raised for the Dan Frantz Fund in the first year of the matching grant program.

In an unprecedented move, in January 2012, it was announced that Hupy and Abraham, S.C. would pledge a triple match grant program, this time challenging the membership to raise $10,000. If ABATE could raise that amount by December, Hupy and Abraham, S.C. would match that with a donation of $10,000. In addition, Attorney Hupy would also match that amount with a personal check in the amount of $10,000. Again, the membership came through with a total of $22,000 raised, and thanks to the matching grant pledges by Hupy, $42,000 was paid to the mortgage reduction fund.

Expressing his gratitude, Attorney Hupy said, “In the second year of our law firm’s matching grant challenge to ABATE members and friends, ABATE of Wisconsin exceeded all expectations by receiving over $59,000 for the Dan Frantz Fund.  Hupy and Abraham, S.C. wants to congratulate ABATE and thank all the individual and business donors who made this possible. Paying down the mortgage on ABATE Acres is a priority, and hopefully the generosity and enthusiasm will continue until the land is free and clear.”

Those first two years were an exercise in how to engage people in a worthwhile cause. There is a greater feeling of ownership and being a shareholder when you donate to a cause like this.

With continued matching grant pledges for 2014 and 2015, it was learned that the balance on the mortgage was reduced to a point that the payoff date was moved up to fall 2016, a year earlier than the projected 2017 final payment.

Attorney Hupy’s challenge for 2016 was for the membership to raise $4,000 by the June Summer Hummer and he would match that amount, which would pay off the outstanding balance on the land.  Once again the membership rose to the challenge and raised an amazing $11,000 in one weekend during the annual Officer Training program. Attorney Hupy will present his matching check for $4,000 at this year’s Summer Hummer. As for the excess of $7,000 that ABATE raised during Officer Training, Attorney Hupy advised that ABATE should use that money however ABATE sees fit to benefit the organization and its mission. It should be noted that Hupy and Abraham, S.C. sponsored the evening banquet at Officer Training also; something the firm has done for years to help defray costs to the organization.