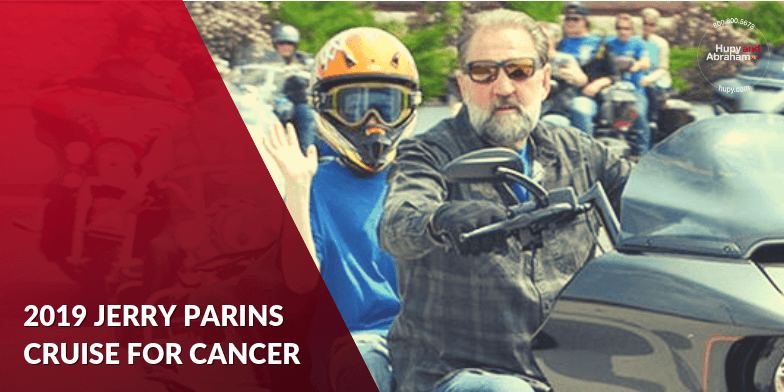 Each year in June, Hupy and Abraham, S.C. looks forward to donating to the Jerry Parins Cruise for Cancer Ride. A former captain of internal affairs for the Green Bay Police Department, Parins retired from his post in 1992 to assume the role of director of corporate security for the Green Bay Packers.  His 40-year association with the team began in 1965 under Head Coach Vince Lombardi, who contacted the Green Bay Police Department looking for help keeping fans off the practice field. Parins, then 24, volunteered his time by working practices, game days and assisting in the Packers weight room.

Diagnosed with cancer on February 10, 2003, Parins embarked on a journey that changed his life. Throughout his surgery and two grueling battles with chemotherapy, which lasted nearly a year, he benefited from the unwavering support of his family, friends and co-workers from the Green Bay Packers.

Sixteen years ago, Parins collaborated with Vandervest Harley-Davidson to organize a ride to raise awareness and funds to fight cancer. Since then, his ride has raised over $1.5 million for cancer research, and to assist local families in northeastern Wisconsin fight this disease.

"The cruise has partnered with area cancer-related organizations in an effort to enrich the lives of local families experiencing the life-altering effects of cancer. Together with the help of the community, our quest is to instill the love of life in our recipients through providing compassionate care and support during their journey with cancer and beyond. A one day smile may be contagious and invaluable." -- Jerry Parins

Vandervest Harley-Davidson, located at 1966 Velp Avenue, Green Bay, was the starting site and location of the tailgate party following this year’s ride.  Raffles, food, drink and music entertained the hundreds of participants. The Packerland HOG chapter assisted as ride marshals during the ride, which visited Copperfest in Oconto before returning to the dealership.

Shawn Brock, an attorney in the Hupy and Abraham Appleton office, was on hand to spread the “Watch for Motorcycles” message and provide free items including a great baseball-style hat to riders.

Learn more about the Parins Cruise for Cancer by watching this video from the 2015 ride: https://www.youtube.com/watch?v=9WSeBpoB9Bw