As riders, our goal is to help other riders avoid injury. Accordingly, Hupy and Abraham actively supports motorcycle safety and education programs. Below is  sampling of how we did that during the first decade of this century.

During the early 2000’s Hupy and Abraham committed to donating $26,000 to the motorcycling community. $10,000 went to ABATE of Wisconsin, $10,000 went to the Illinois Motorcyclists Rights Association, $1,000 will to the Motorcycle Riders Foundation (MRF), and $5,000 went to local chapters of A.B.A.T.E. of Illinois. The money going to ABATE organizations will be in the form of advertisements, sponsorship of events, and donations to individuals in needs. 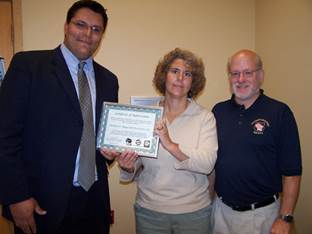 The Hupy Law Firm was recognized at a Motorcycle Safety Summit in Lake Mills, Wisconsin on September 28, 2005.

The Hupy Law Firm sponsored an alcohol awareness public service commercial, aired on Charter Cable programs in Dane and Jefferson Counties. The 30-second spot featured Hupy accident investigator, Tony "Pan" Sanfelipo urging riders not to drink and ride. The spot received critical acclaim from the Coalition members, DOT and law enforcement, and reached 170,600 households over the contract period of May through August, 2005.

The committee chose to air the commercial again in 2006. In 2006, the Hupy Law Frim sponsored the commercial for four months – from May to August – because the message is so important. This public service announcement was reached more than 270,000 households in the two counties over the four month period.

On April 28-29, 2006, motorcycle rights activists from Illinois, Iowa, Wisconsin, and other states were in East Peoria, Illinois for the 17th Annual Heartland STEAM conference.

STEAM is an acronym for Seminar To Educate And Motivate, and that’s exactly what it does. It brings new life into the arena by attracting young motorcyclists who want to support the various rights organizations. It also regenerates and charges the batteries of older, experienced activists who sometimes need a little boost. Keynote speakers and workshops on a variety of subjects educate the audience on what is currently going on in the world of motorcycling and motorcycle rights.

Hupy and Abraham sponsored the Saturday evening dinner at the conference as part of its efforts to support the motorcycle rights community.

Proceeds from this event are donated to the Motorcycle Riders Foundation (MRF) to assist with funding the operational costs of maintaining a lobby effort and office in Washington, D.C.

In 2007, the annual STEAM conference took place in Onalaska, Wisconsin. ABATE of Wisconsin hosted this event and attendees participated in workshops on federal legislative issues and safety and legislative issues effecting the various states. Accident Scene Management conducted two sessions; securing the scene of an accident and rescue breathing and helmet removal.

Hupy and Abraham sponsored the lunch and dinner at Heartland Steam and law firm partner Michael Hupy attended the event.

In 2007, Attorney Hupy mailed a two page explanation of Wisconsin Act 466 to over 800 law enforcement agencies on behalf of ABATE of Wisconsin. Act 466 makes changes to Wisconsin law regarding right of way violations, among other things.

Specifically, ABATE was concerned about the number of accidents caused by other drivers infringing on the right of way of motorcyclists. Parts of the Act call for increased fines, license suspension and mandatory education classes for violators. Newspaper articles and first hand accounts of accidents suggested that the new penalties were not being applied.

Hupy and Abraham has supported the Tommy Thomson Governor’s Ride for many years. Below is a description of how we supported the10th annual ride in 2004 and in previous years.

Ever since the beginning, Michael F. Hupy & Associates, has supported the Tommy Thompson Governor’s Ride. That support came in the way of providing the Head Road Captain for the ride, and since the second ride on, the t-shirts for the Road Guards.

Michael Hupy has allowed Tony “Pan” Sanfelipo, an accident investigator for the firm, to take time away from work to act as Head Road Captain for this special ride. Tony hand picked the various Road Guards and medical personnel who work with him, and the law firm pays for the t-shirts for all the volunteers.

2004 marked the 10th Annual Governor’s Ride, and Tommy Thompson, now Secretary of Health and Human Services, came back to Wisconsin from Washington, D.C., to join the ride again. Thompson hasn’t missed a ride yet, although his duties in Washington have prevented him from doing the entire ride this year and last. Thompson personally thanked Tony for his help in organizing and providing security for all the riders for the past ten years. He did this at the 5th Annual rider’s Ball, a tradition marking the last day of the Governor’s Ride. The rider’s Ball is presented by Jerry and Kathy Weiner, two wonderful and generous friends of Tommy Thompson who met him on one of the early rides, and have been coming back and sponsoring the ball every year.

The Governor’s Ride joined the Women in Motion Ride for the second year in a row, to benefit Accident Scene Management. This year’s party was at the ending location, the beautiful Capitol City Harley-Davidson, in Madison, Wisconsin. Owner, Bob Oyler, provided his spacious second floor ballroom at the dealership for the festivities. Secretary Thompson spent a considerable amount of time walking around and greeting people in attendance. He took special time to talk to Attorney Michael Hupy and his partner, Jason Abraham, and their wives, Susanne and Tina.

Our commitment to this ride – and to all matters impacting the safety and rights of Wisconsin, Illinois, and Iowa riders – continues.