Important issues impacting riders often come up in the state legislatures and federal agencies. Below is a sampling of how Hupy and Abraham lobbied for and supported riders’ rights from 2004 – 2009.

On January 22, 2004, Attorney Michael Hupy and one of his accident investigators, Tony Pan Sanfelipo, spent the day speaking to lawmakers about AB455.

Urging the legislators to support the measure, Attorney Hupy explained the nuances of the bill and how a recent Wisconsin Supreme Court ruling was punitive and unfair to injured motorcyclists. After testifying before the Senate Judiciary Committee, SB223, the Senate version of the bill, moved out of committee with a favorable vote and the Senate passed the bill by a vote of 23-9.

Attorney Hupy spoke to nine Assembly members and three Senators about this legislation. He was in the Capitol from nine o’clock in the morning until five in the afternoon.

In 2005, the MRF thanked Attorney Michael Hupy for his donation of $1,000 which enabled Jennifer Lynn Basden of ABATE of South Carolina and Robert Cuthbertson of ABATE of California to receive scholarships to attend the Meeting of the Minds. The scholarship program was created to provide training and mentoring of young activists, teaching them to step forward and answer the challenges that face tomorrow’s motorcyclists.

In 2006, Mr. Hupy received the following letter for his $2,000 contribution to MRF’s Young Activist Scholarship Program. 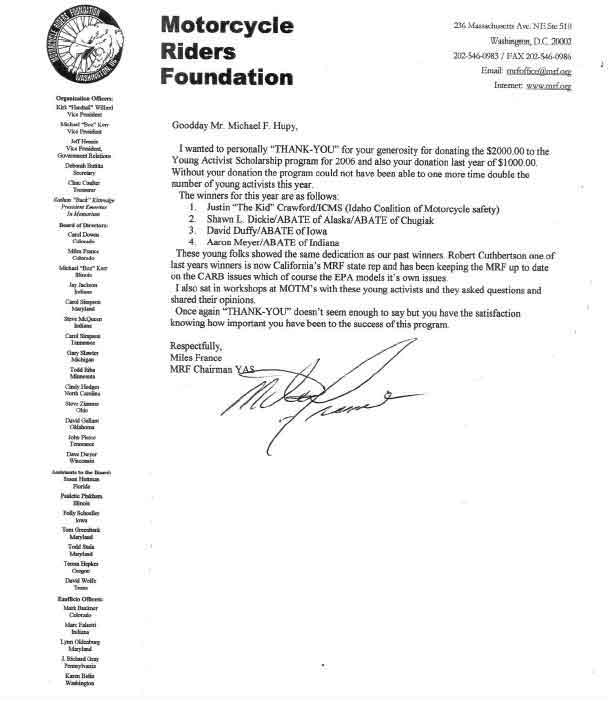 Vicki Sanfelipo founded Accident Scene Management, Inc, in 1996, with the help of the Hupy Law Firm (the firm provides financial support as well as attorneys to lecture on insurance needs). To date, over 6,000 people have been trained on what to do at the scene of an accident until professional help arrives.

Innocorp, maker of fatal vision glasses, received a grant from NHTSA to study, implement, and evaluate how to influence motorcyclists not to drink alcohol and ride their motorcycles. Mike Aguilar, president of Innocorp, recognizes the significant work that Tony & Vicki are doing to reduce injuries and fatalities to motorcyclists and requested their presence at this meeting.

The information provided above does not reflect all of Hupy and Abraham’s work. Much of our work during this time was done with ABATE. For more information about it, please read our ABATE article.