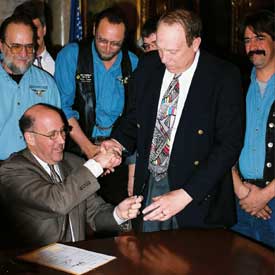 A year and a half ago, Attorney Michael F. Hupy read a Wisconsin Supreme Court case he did not agree with. Instead of following the dictates of the Court, he did something very unusual. He decided to go to Madison and overrule the Supreme Court's decision.

While the bill was pending, the Milwaukee Journal Sentinel, after a lengthy interview with Hupy, changed its prior position on helmet laws and wrote an editorial favoring the bill.

After the Assembly passed the bill on March 2, 2004, Hupy contacted the Governor and urged him to sign the bill into law. The Governor's response was to invite Hupy to the signing in his office on March 15, 2004. Governor Jim Doyle publicly thanked Attorney Hupy for the work that he had done to get the bill to his desk and presented him with a pen used to sign the bill.

Failure to make this change in Wisconsin law would have had a devastating affect on injured riders. In an accident that was 100% the other driver's fault, a motorcyclist with a serious head injury could end up losing all of a multi-million-dollar verdict and walk away with nothing if the insurance company could successfully argue to a jury that wearing a helmet would have prevented all of the head injury. Hupy and Sanfelipo saw this as an attempt to judicially mandate a helmet law in Wisconsin despite the fact that the legislature repealed Wisconsin's helmet law twenty-five years ago.

In a live interview on rider Broadcasting on March 14, 2004, Hupy, who is a life member of ABATE of Wisconsin and a member of A.B.A.T.E. of Illinois, praised both organizations and others for the work that they have done to protect the interests of riders.