As of July 1, you will be able to travel the roads of South Dakota without worry of being ticketed if your handlebar grips are higher than your shoulders. In the past, you could have been cited if your hands were at or above shoulder height. 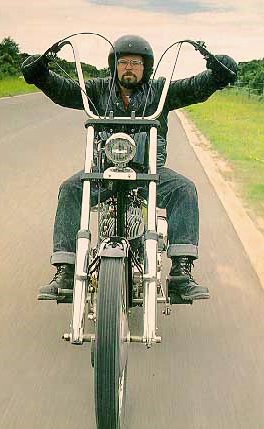 With Governor Dennis Daugaard signing SB 85, a slew of articles have appeared in print and on social media networks urging riders to come to the Black Hills for this year’s Sturgis Rally, in celebration of the 75th Anniversary. Even the legendary Buffalo Chip has chimed in on the repeal of the archaic handlebar height law. Of course, greater attendance to the rally is beneficial to commercial enterprises like the Buffalo Chip, but one has to wonder if any of those commentators on the new law had joined the voices in the past that were against the law. In fact, ABATE of South Dakota has been waiting 11 years for the right moment to move repeal legislation forward, yet none of the articles I’ve read gave credit to or even mentioned ABATE.

Years of building political capitol and learning the most effective techniques to achieve its legislative goals is an art ABATE of South Dakota has honed into a razor-sharp tool. If anyone, or any group, should get the credit for repealing the handlebar height requirement, that recognition should go to ABATE. Many riders suspected police used ape hangers as a premise to stop riders for further investigation. ABATE did some research on the subject and found little, if any, data suggesting that the high bars were a true safety problem, and few of the stops resulted in anything more than a warning and lecture.

Choosing the high road, ABATE pursued the strategy of enlightening legislators that there were no national standards on handlebar height, and no studies indicating that ape hangers caused crashes. As a matter of fact, high bars are actually beneficial to some riders who have physical limitations or other medical conditions. I know of one particular female rider who suffered head and neck injuries in a crash, and prefers the high bars because they are more comfortable. She often rides in excess of 200 miles a day, visits Sturgis each year, and rides the 900 miles from home, often in one day. She was the recipient of one of the safety lectures from police in Keystone, despite the fact she had a letter from her doctor in the form of a prescription, advising the use of high bars.

Congratulations to ABATE of South Dakota on this much appreciated victory. State Coordinator Jiggs Cressy and Legislative Officer John Steele did a great job of presenting the rider’s position to the legislature. Former Legislative Officer Larry “Deadwood” Nielson offered expert testimony during the hearing on SB 85, and the bill passed out of committee with a vote of 6-0 and passed the Senate 34-0. ABATE of South Dakota urges riders to visit the state with whatever height handlebars are comfortable, reminding everyone that there is good riding all summer long, not only in August.