Elio Motors: Is it a Car or a Motorcycle?

Elio Motors started out as an idea back in 2008, an alternative vehicle that could ease the pain in the wallet with increasing gasoline prices. Touted as getting 84 mpg with its in-line, three cylinder 1.0 liter engine, it seemed a great investment idea. In fact, the company has raised over $50 million so far and has thousands of prospective customers waiting for production to begin. 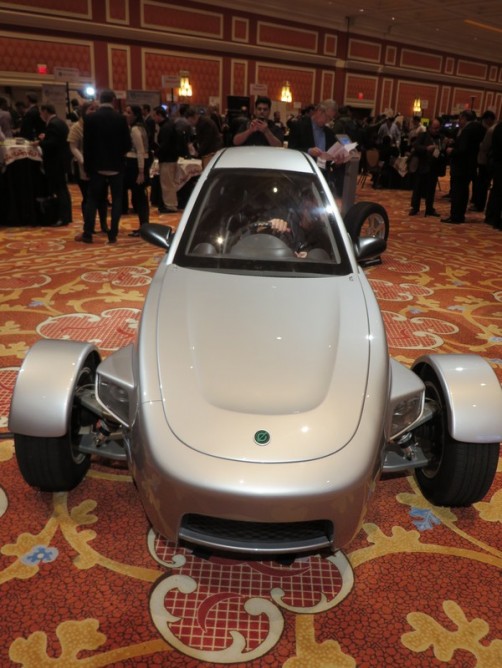 The conundrum is what to call this vehicle: is it a car or is it a motorcycle.  If it were considered a car, it would be subject to all kinds of safety and emission standards.  But because it has only three wheels, it was considered a motorcycle. As a motorcycle, the vehicle faced a marketing nightmare.  The Elio has an enclosed passenger compartment and if viewed above the wheelbase, would look like a small car. But because it has three wheels, and is considered a motorcycle, it would be subject to various helmet laws around the country. The problem is nobody wants to wear a helmet in an enclosed compartment (just as nobody wants to wear a helmet in a car).  Even in states without a mandatory helmet law for adults, those under a certain age, 21, 19 or 18 depending on the state, or with a learner's permit would have to wear a helmet.

To overcome this, Elio has called it's vehicle an "autocycle" for purposes of definition.  It does have an enclosed compartment but most people would consider it a three wheel motorcycle. It's smaller than a car (small cars weigh around 2,500 pounds; the Elio weighs in at 1,200 pounds).

When production begins this fall in Shreveport, Louisiana, it is expected that as many as 3,000 jobs could be created. But Louisiana has a helmet law and that's a big problem for securing orders in the home state. Recently,  Colorado and Illinois joined other states in removing the helmet requirement from the Elio autocycle. That would alleviate the problem for Elio in those states, but there is a long road ahead for the company in gaining acceptance as an autocycle manufacturer. Time will tell if this concept will succeed. There are many naysayers, but who wouldn't want a vehicle that got 84mpg and only cost $6,500.

Read More About Elio Motors: Is it a Car or a Motorcycle?...