Deer vs. Motorcycle: An Increasing Danger

With colder temperatures and fall just around the corner, we start to think more about deer colisions, especially in the northern midwestern states. There are many schools of thought regarding how to avoid a deer collision but nothing seems to be based on hard scientific fact.

Some accepted strategies include: 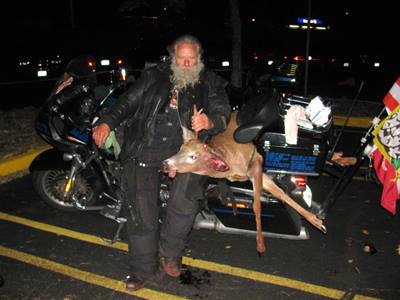 Former state senator Dave Zien and the deer he hit in 2009 with his motorcycle.

In 2012 in Wisconsin, of the 14 fatalities caused by collisions with deer, 13 were motorcyclists. In fact, 69.9% of deer vs. motorcycle crashes resulted in serious injury or death in Wisconsin.

Iowa is another state that has seen a dramatic increase in deer vs. motorcycle collisions. According to State Farm Insurance, your chances of hitting a deer in Iowa are 1 in 77. Iowa is ranked fourth in the nation for deer strikes.

Ranked at number 7, Wisconsinites have a 1 in 85 chance of hitting a deer, followed by 8th ranked Minnesota, 1 in 88.

Although we think of the fall as the time to watch for deer, last year, June was the most dangerous month in Wisconsin.  Remain alert even when riding in larger cities. Because of the urban sprawl and over crowding, deer are moving into cities, especially where there are green spaces like parks and suburban yards. Evidence is the increasing number of deer carcasses on urban expressway systems.