The last day of the biannual Motorcycle Cannonball was everything but easy. With only 102 miles to travel, the riders started leaving at 7:45 am with the first challenge being a 20 mile, 5000 ft. climb to the top of the San Bernardino mountain pass. Dubbed the “Palms to Pines” highway, this route provided a scenic challenge for the riders. 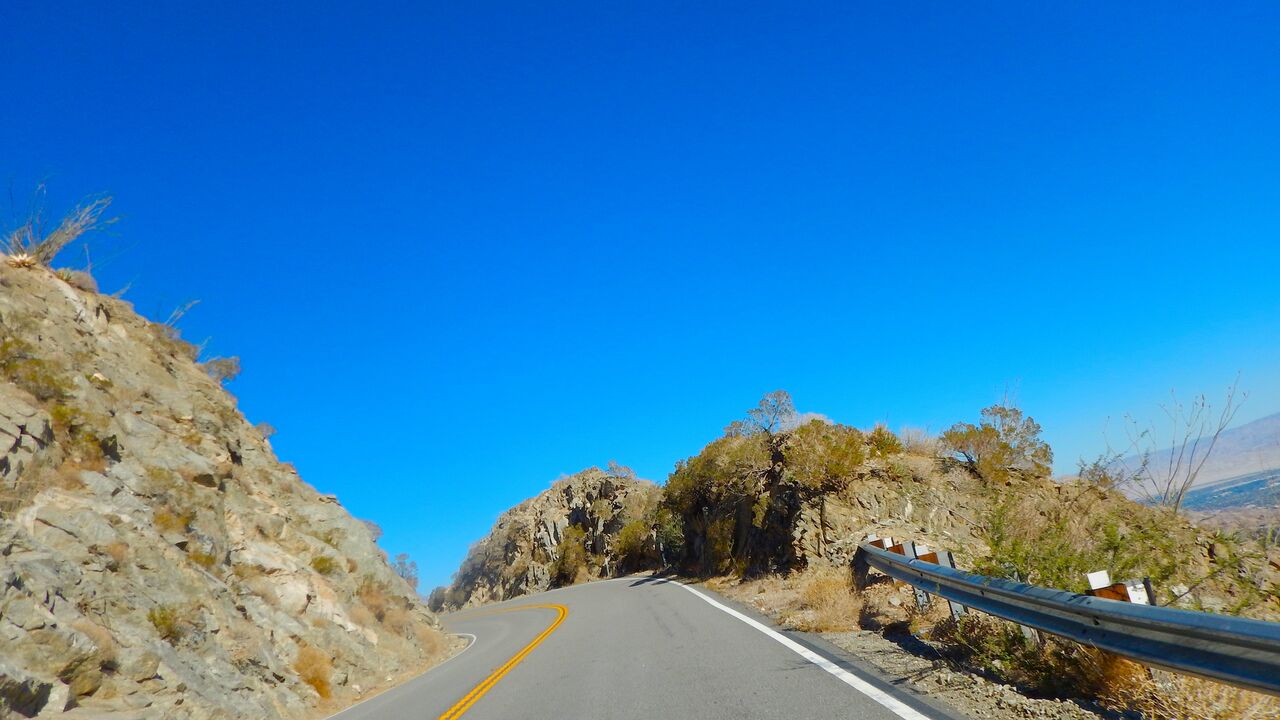 I saw the chase vehicle picking up #104,  Canadian Perry Ruiter, at mile marker 5.  Then I saw the Italian, Ciri Nasi #103, pushing his bike. Wow, this is going to be a hard climb for him.  At mile marker #39 I stopped to visit with Linda Monahan, #39, as she waited for the trailer.  At the top of the climb, the morning air was cool and provided a welcome relief from the heat we had been experiencing, but no relief for mechanical problems that continued to plague some of the machines.

As we descended on the other side the winds picked up, hurling the dry desert sand at us which felt like we were being sand blasted. Rocks, branches and sand on the road made for some unsafe conditions. The sand, propelled by the high winds, was getting into my hair, behind my glasses and into my eyes, while somehow managing to invade every open crease in my clothing.  I stopped to put more clothes on for protection and the wind presented a real challenge to getting back on my bike. We finally reached the bottom where traffic and heat accosted the riders one last time.  The crowd at Temecula Harley-Davidson was enthusiastic and it felt good to experience the cheering as riders entered the parking lot. We were now just 35 miles from the finish where some of these riders will make history. 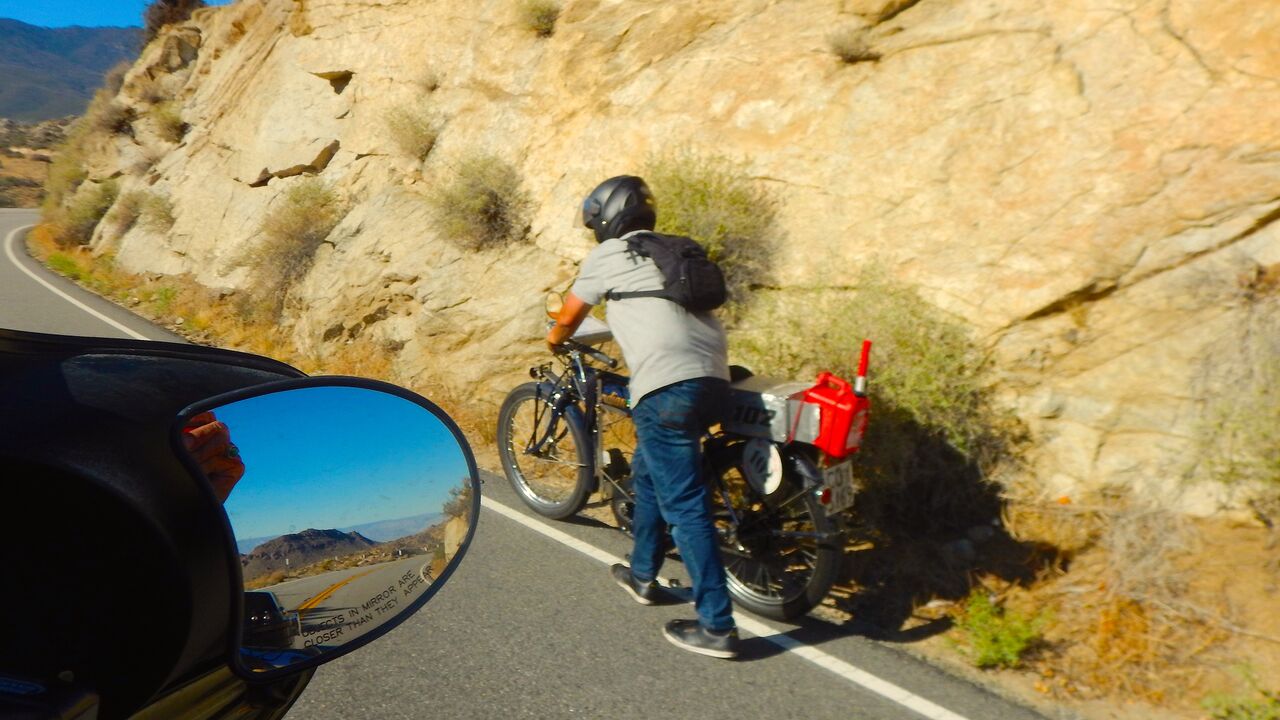 A police officer followed rider #29, Ryan Allen, to see what was going on and when he heard what the ride was about, he offered a police escort through the congested area. We rode the next 34 miles in the heat of the day, forecasted to be 102 degrees.  I saw #110, #115, #8, #84 and #16 pulled over but everyone had helpers with them.  Later I saw Doug Wothke come alongside #2, Texan Steve Decosa, pointing to his rear brake caliper linkage that was dragging on the ground.  This apparently upset Decosa, who had successfully crossed the country on his 1915 Harley-Davidson with a perfect score so far.  Currently in the number six position on the leader board, he wasn’t about to end his day here with no brakes. To avoid stopping, he took the shoulder to pass cars, turned right at intersections and performed U-turns to avoid having to stop altogether. How thrilling it was to see him roll across the finish line.

When we got to the staging area along the ocean, they were lining the bikes up for the final assault on the finish.  The riders left according to class. Class I, the smallest engines with single speed went first, followed by Class II and then Class III. The excitement was palpable as we rode downhill to the Carlsbad Expressway, along the Ocean. The air was cooler but the traffic and pedestrians were a challenge to navigate. Splitting lanes is legal in California making it easier for the guys (and girls) to weave through the slow moving traffic and keep rolling.  I saw #91, Ziggy, pushing his 1916 Indian. He told me later that he lost the pedal on his kicker and this clutch mechanism gave out.  Undeterred, he pushed his bike over the finish line completing all but 81 miles of this cross-country trek. 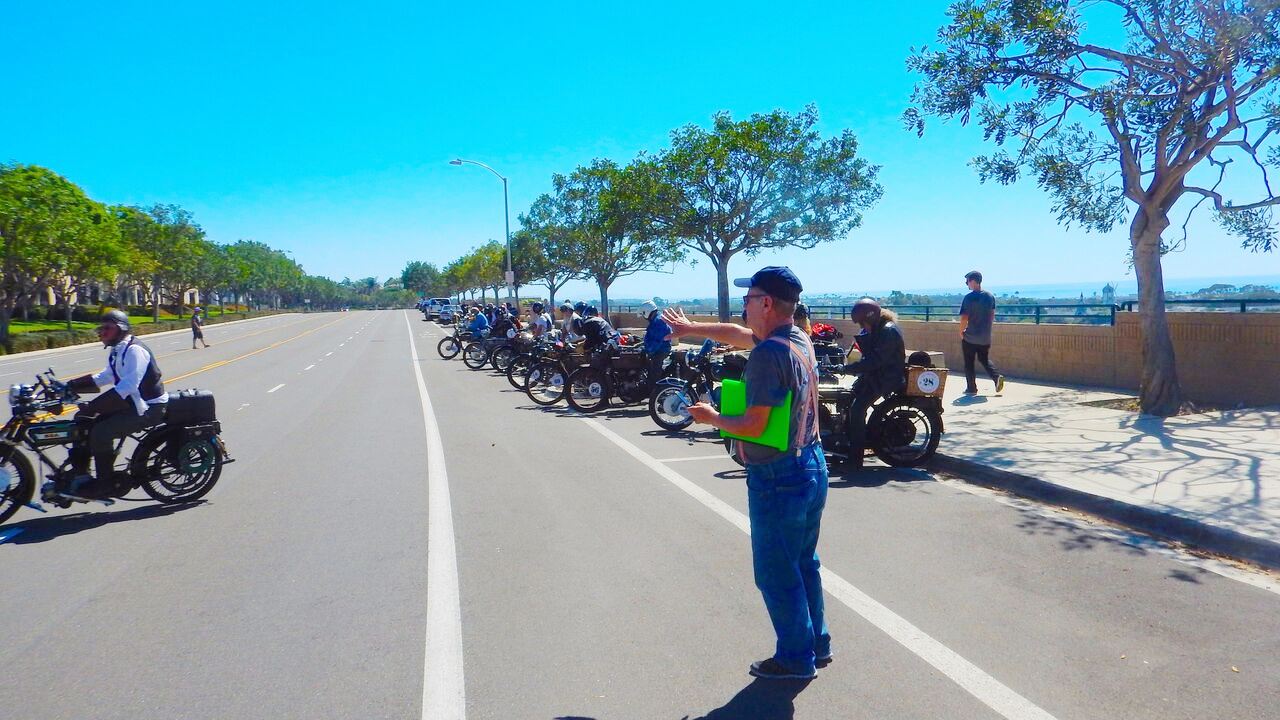 At the Carlsbad Visitor Center the riders and crowd were in full celebration mode. Champaign was flowing while eager families and friends greeted their loved ones. The look of love and admiration that exchanged in their eyes was one of my favorite moments of the entire event.  Exhaustion in the riders was evident but you could also see they were relieved in knowing they were done.  Scott Jacobs and wife Sharon were there to greet us. Scott had crashed on day two which took them both out of the event as they dealt with Scott’s surgery and recovery.  16 motorcyclists completed the ride with 3,306 miles and no penalties.  Henderson captured the first three spots, followed by a Harley in fourth place. Another Henderson was in fifth, followed by six Harleys in sixth through 11th place. Indians captured 12th, 15th and 16th place, with two Harleys coming in at 13th and 14th place. Certainly, these early American motorcycles dominated the field.

The celebration banquet at the Holiday Inn gave everyone an opportunity to clean up and put on his or her celebration attire. The couture was as varied as the personalities of the wearers, ranging from cocktail dresses to shorts with Hawaiian shirts.

Awards were presented by Jason Sims, Director of Operations, and Paul d’Orleans, who emceed the evening program. Jason started the evening comments by saying: “We made history and we did it as a family”.  A new award was presented this year from Lonnie Islam, Jr. who founded the Cannonball but was unable to participate due to health issues. The award was called the “Spirit of the Cannonball” and is awarded to a person who showed dedication, perseverance and a love for riding. The person receiving the award received a Lifetime Cannonball Entry, a Michael Lichter picture from the Atlantic City Boardwalk start and a personalized custom Cannonball Banner. The award went to #13, Dean Bordigioni, a wine maker from California who rode his Class I, 1914 Harley-Davidson across country (3,305 miles), accumulating one penalty point near the end of competition. Some tears and a standing ovation accompanied that decision. 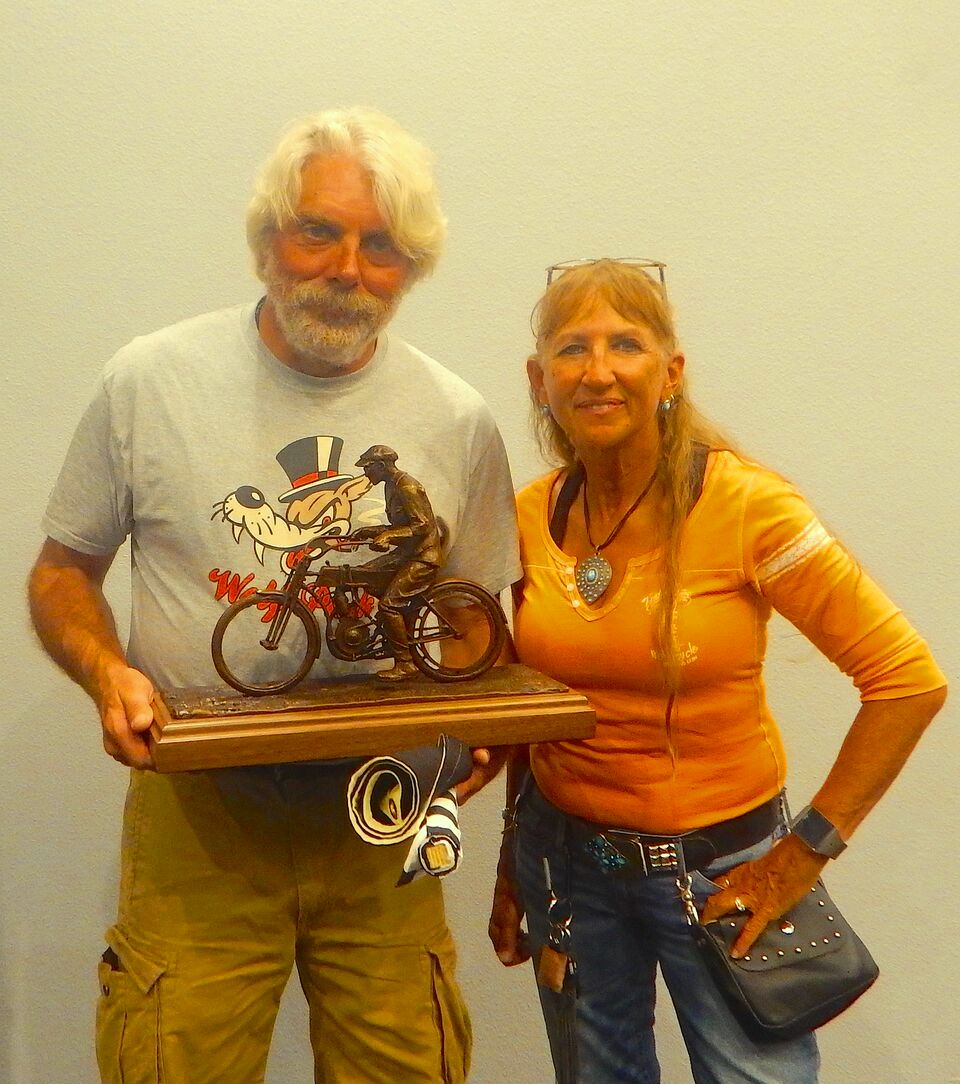 The overall winner of the Cannonball was Frank Westfall, #49, on his Class II, 1912 Henderson with a total of 3,306 penalty-free miles.  Frank won a custom brass Cannonball figurine made by sculptor Jeff Decker.  Runner up was Byrne Bramwell, riding his Class II, 1913 Henderson. Of the top five finishers, only one was a Harley- Davidson, ridden by 79 year old Victor Boocock of California.

For you Wisconsin fans, Doc Hopkins of Doc’s Harley-Davidson, finished tenth over-all and fifth place among the Class III competitors on his 1916 Harley, the only one with a side-car and passenger (Dawn Hamilton).  Bill Rodencal, of the Harley-Davidson Museum, finished in 49th place, after failing to complete seven of the stages due to mechanical problems.

Jason ended the evening festivities by saying, “Many of you are wondering about the future of the Cannonball.” The room got quiet as he waited for everyone’s attention. With one fist in the air he exclaimed, “Cannonball”!

For complete standings, visit the Cannonball official website for the chart.