Are You Breaking the Law for Safety? 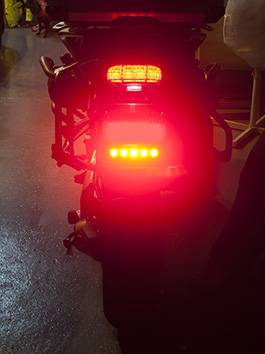 Conspicuity has long been touted as a means of making you safer while riding your motorcycle.

Along with all the high visibility clothing, like Conspicuity’s See-Me and Super See-Me vests, advanced lighting systems for motorcycles have improved safety for motorcyclists.  The Federal Government has recognized the importance of preventing motorcycle crashes by allowing modulating headlamps, following Europe’s lead. FMVSS 108 (49 CFR Part 571.108 S7.9. 4) allows motorcycle headlight modulation systems in all 50 states. “A headlamp on a motorcycle may be wired to modulate either the upper beam or the lower beam from its maximum intensity to a lesser intensity.” 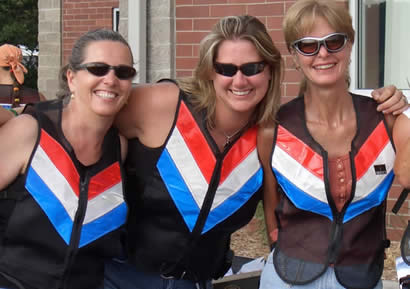 State laws further define the rules of operation in a particular state. In Wisconsin, it is clarified in state statute 347.115 Modulating headlamps for motorcycles, motor bicycles or mopeds:

"A motorcycle, motor bicycle or moped may be equipped with and use a means of modulating the upper beam of the headlamp between a high and a lower brightness at a rate of 200 to 280 changes per minute. A headlamp may not be modulated during hours of darkness."

The initial annoyance some car drivers experienced with modulating lights has passed and these systems are universally accepted as legal and beneficial.  The mandatory “lights on” at all times for motorcycles for safety became an issue when more and more cars operated with lights on. Motorcycles became immersed in a sea of headlights during daylight hours, rendering them less conspicuous than before it became popular to run all vehicles with lights on. Modulating headlights for motorcycles helped remedy that problem.

Tennessee clarified this confusion over red versus amber by adding this language to its law; "provided, however, that the foregoing prohibition shall not apply to the utilization of a continuously flashing light system on a motorcycle. For the purposes of this part, 'continuously flashing light system' means a brake light system on a motorcycle in which the brake lamp pulses rapidly for no more than five (5) seconds when the brake is applied, and then converts to a continuous light as a normal brake lamp until such time as the brake is released."

An example of how these systems work is demonstrated here.

So even if Wisconsin allows deceleration warning systems, if you have one of the popular units like Back Off, Tail Stopper or Thor, you’re probably in violation of Wisconsin law which requires an amber light.  Most states that allow brake light modulators require that these systems use a certain amount of power and that the flashing program selected lasts five seconds or less before going to steady red light.

The restriction calling for an amber light in the brake modulating system in Wisconsin seems to be in conflict with the statute explaining restrictions on the use of lamps;

347.07  Special restrictions on lamps and the use thereof.

(2)  Except as provided in sub. (3), or as otherwise expressly authorized or required by this chapter, no person shall operate any vehicle or equipment on a highway which has displayed thereon:

(a) Any color of light other than white or amber visible from directly in front; or

(b) Any color of light other than red on the rear; or

(3)  A motorcycle may be equipped with a lighting device that illuminates the ground directly beneath the motorcycle if all of the following apply:

(a) The lighting device is not visible to approaching vehicles.

(b) The lighting device does not display a red, blue, or amber light.

(c) The lighting device does not display a flashing, oscillating, or rotating light.

There is a lot of confusion from state to state whether these brake warning systems are legal or not. It’s important that you check your current state law regarding lighting on a motorcycle, and if there is no provision for brake warning systems on motorcycles, or the language is vague or does not allow direct linkage to the “red” brake light, you need to consult with your legislators to amend the statute. Conspicuity is an important safety issue for motorcyclists, and mandating reflective clothing will not solve the problem. Allowing the cycle to be equipped with lights that warn other drivers that the cyclist is braking or decelerating is the best option.

Remember, if you've been involved in a motorcycle wreck you need to speak with an experienced motorcycle accident attorney as soon as possible. Contact us online or call us directly at 800.800.5678 for your free consultation.