ABATE of Wisconsin has been fighting for motorcyclist’s rights since 1974. 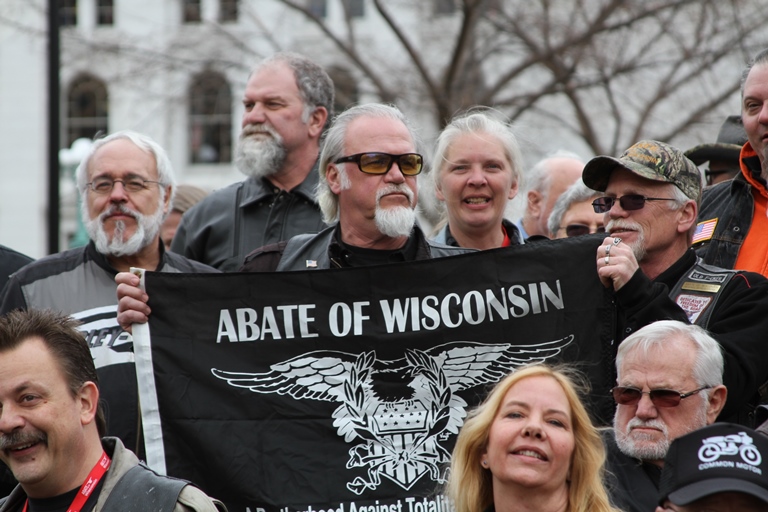 Known for repealing the mandatory helmet law for adults in 1978, ABATE has continued to represent the rights and safety of the state’s motorcyclists in a variety of ways.  Legalizing angle parking for cycles and allowing three motorcycles to share a single meter space, clarifying the forfeiture laws and halting indiscriminate confiscation of motorcycles, establishing an award-winning beginner’s riding course and creating a Share the Road education program for schools are among some of the accomplishments of ABATE of Wisconsin.

Another legacy of ABATE is the development of a proficient grass-roots lobby effort.  ABATE has always lobbied its state legislators for justice and safety, but those humble beginnings of four to five leather-clad riders meeting a dozen or so lawmakers every other year has evolved into a well-oiled machine bringing approximately 500 members and friends to the capitol each year. From the outside looking in, it appears to run flawlessly and effortlessly. In truth, months of preparation go into each year’s annual lobby day. Members, expert in presenting ABATE’s concerns, plan, coordinate, educate and facilitate each effort to meet with all 99 members of the Assembly and all 33 members of the Senate.  Leadership of both political parties are also contacted as well as the governor’s office prior to the convergence on the capitol by the members of ABATE’s eight districts and 39 regions.

ABATE legislative chairperson Steve Panten had meetings with the governor’s office regarding the concern over autocycles being classified as motorcycles. He also met with Supreme Court Justice Annette Ziegler to explain some discrepancies in the definition of certain right-of-way violations. Many other meetings, phone calls and discussions took place with legislators and among ABATE officers and committee members.

ABATE’s lobby day was set for February 23, 2017, and in December 2016 and January 2017, Steve Panten and Executive Director Dave “Chubby” Charlebois traveled to each of the eight ABATE districts in the state to conduct workshops for members on how to properly lobby state lawmakers. This was the first time such a huge endeavor was attempted to help members understand what ABATE wanted to accomplish in this year's legislative session.

In the separate regions, certain members volunteered to set appointments with their region’s respective legislators, booking conference rooms at the capitol for afternoon meetings. To facilitate the huge number of people attending lobby day, buses were chartered throughout the state for free rides to and from the capitol, picking up riders at selected sites along the interstate system.  Hupy and Abraham, S.C. has furnished these buses for the southeastern districts for several years at no cost to ABATE. Members who decided to ride or drive to Madison could park at the CC Riders MC clubhouse, a local motorcycle club influential in biker’s rights since the helmet repeal days. From there, the club furnished a free shuttle service to and from the capitol.

Once at the capitol, everyone congregated at a hotel on the square,  the Best Western Inn on the Park, where ABATE provided a staging area in a conference room with coffee and doughnuts, printed materials, speaking points and group meeting designations.

Some legislators were contacted directly that day at their personal offices in the capitol. Others participated in group sessions held in conference rooms, with discussion led by two or three selected representatives of ABATE, while others in attendance listened to the commentary and any questions from the legislators or staff persons.

Although a lot of work and preparation went into the day, there was a fun element, besides the fun of participating in the legislative process. At noon, many of the ABATE members gathered for a group photo on the steps leading into the capitol building.

After meetings had concluded, participants returned to the hotel staging area to fill out completion notes and write thank you notes to be sent to legislators.

After a long day, members and friends retreated to area parking structures, hopped on chartered buses or took the CC Riders shuttle back to their clubhouse for some socializing before returning to wherever their home was.  It all looked so easy and organized because it was. But looks can be deceiving. Months of work by dedicated individuals made lobby day an enjoyable experience for those who just chose to come and represent.  But each of those members and friends played a vital part in making this year’s lobby day another successful event.  You should make plans on attending next year’s ABATE Lobby Day. If you’re not a member of ABATE, you should consider joining the people who are ensuring your right to ride remains free, safe and enjoyable.