A Big Win in Milwaukee for Motorcycle Clubs Everywhere

On February 19, 2019, the City of Milwaukee’s Neighborhood Services Department threatened to fine and continue fining the Outlaws Motorcycle Club based on the city’s graffiti ordinance. The club was given until March 18 to remove all graffiti on its building in the 2nd Aldermanic District of Milwaukee. If the club, which owns the building, fails to remove the graffiti, the Department of Neighborhood Services would hire private contractors and the cost of graffiti abatement would fall upon the club. In addition, an administrative fee of $110 would be charged as a lien upon the property.  Failure to comply by the March 18 deadline could subject the club to prosecution and daily penalties of $150 to $10,000 in a manner provided for in the ordinances.

The club contacted Hupy and Abraham, S.C., because it had previous representation from the firm. It was Hupy and Abraham, S.C. that successfully represented several members of the Outlaws who were expelled from the World Festival grounds during the Summerfest celebration for no reason other than they were wearing club logos on their shirts.

This was another blatant attempt to attack the identity of a motorcycle club by erroneous interpretation of the ordinances governing signage on a building. Graffiti is the unlawful defacing of another’s property without permission. Clearly, the Outlaws own the building and had it painted themselves. This is no different than dozens of other buildings adorned with artwork, which is neither signage nor graffiti. 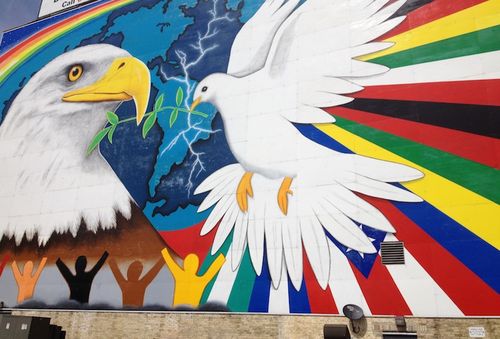 Mural of Peace, at 611 W. National Ave. is near the Outlaws clubhouse and adorns a building seen by thousands of commuters each day from the freeway. 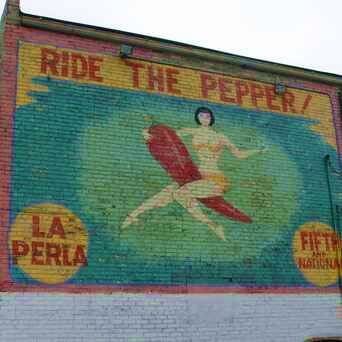 Signage on building for the La Perla restaurant is in the same district as the motorcycle club.

The government has engaged in this questionable activity for years, like the attempt to confiscate the logo of the Mongols motorcycle club. These practices are intended to steal the identity of clubs and cause them to cease to exist. So far, the government has failed, but instances like the order to remove a club logo from a building the club owns, under the premise it is graffiti, is a constant reminder that motorcycle clubs face continuous profiling by the authorities.  Thanks to the quick action by Attorney Jason Abraham, the city dismissed the order to remove the club logo from the Outlaws property. Under the ordinances that govern graffiti, it is considered vandalism if someone paints or otherwise marks a building without the owner’s consent. Clearly, the logo on the building was placed there by the Outlaws, the owners of the building. Putting its logo on the building was no different than a number of murals placed on buildings in the area of the Outlaws building and throughout the city.  The representation by Hupy and Abraham, S.C. was a huge win for the club and for others who own property and wish to add an identifying logo or mural of art to their property.