10 New Bikes for a New Year

Love it or hate it, 2016 was a wild ride. The new year always ushers in change, and not just in waves of new gym memberships, but in manufacturing too. 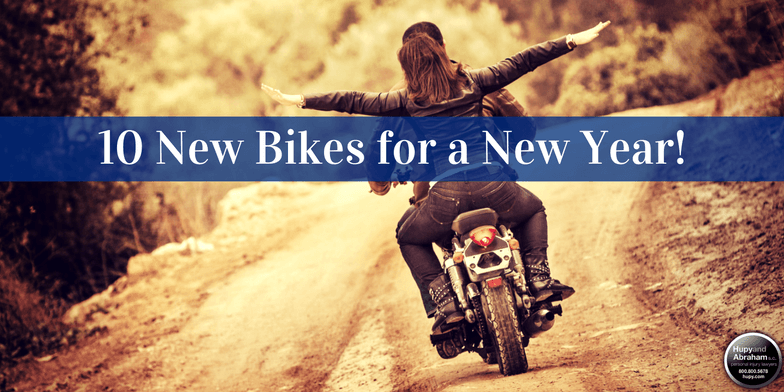 Some of the hottest shows take place when it's cold. EICMA in Milan, Intermot in Germany, the Melbourn Moto Expo in Australia, and IMS in the United States all set the stage to bring a new round of motorcycles to the world. Below are some of the highlights:

The Vanguard Roadster: Marking the birth of a new American brand – Vanguard Motorcycles, the Vanguard Roadster focuses on using cutting-edge technology in both their manufacturing and design. Production is scheduled for 2018, and the company hopes to be a competative heavyweight in the market by 2019.

BMW Vision Next 100: Not one to be outweirded with futuristic tech, BMW Motorrad released a concept bike in California this year – the all-electric BMW Vision Next 100. This self-balancing, crash- avoiding smart motorcycle does everything but your laundry. Complete with heads-up display “data glasses” and a temperature-adjusting smart suit, it allegedly eliminates the need for safety gear. BMW hopes to have the Vision Next 100 in production by 2021.

The Suzuki GSX250R: Bike designs are evolving as the market looks towards more entry-level riders. Lighter, leaner and lower are the fashion and Suzuki has noticed. Unveiled at EICMA this year, the GSX250R is a 24 horsepower, 248 cc fuel-injected entry-level sport bike for all.

The Milwaukee Eight: Harley-Davidson Motor Company has been throwing some heavy curveballs lately. From the electric Livewire to the “Hoglet” Street 500, the iconic motorcycle company is slowly aiming towards a new generation. The Milwaukee Eight is a cooler, smoother, more modern eight-valve engine, and design number nine in Harley-Davidson’s 113-year history.

The Honda Rebel: In 2017, Honda plans to resuscitate one of the most popular midrange cruisers of the ‘80s. Offered as either a 500 cc parallel twin or 300 cc single, the Rebel will once again be available starting in April 2017.

The Kawasaki Versys X-300: Joining the ranks of little bikes that pack a punch, the X-300 will hit the streets in 2017 as a small displacement adventure bike.

The Vespa Elettrica: Piaggio’s first electric model was unleashed this year at EICMA, also marking the company’s 70th year on the market.

The Husqvarna 401 Vitpilen and 401 Svartpilen: The 111-year-old Swedish company unveiled two futuristic looking street bike concepts at EICMA this year that pay homage to the Husqvarna singles of the 1940s.

The Kawasaki Z125 Pro: Proof that good things come in small green packages, the Z125 is a response by Kawasaki to the release and success of the Honda Grom in 2014. The Kawasaki’s 125 ccs of single cylinder power even beats the Grom in price ($3,000), and also offers riders close to 100 mpg.

No matter what you ride, at Hupy and Abraham, we always want you to have fun while staying safe. Order your FREE Watch For Motorcycles sticker and check out our website for regular updates on motorcycle news and events!