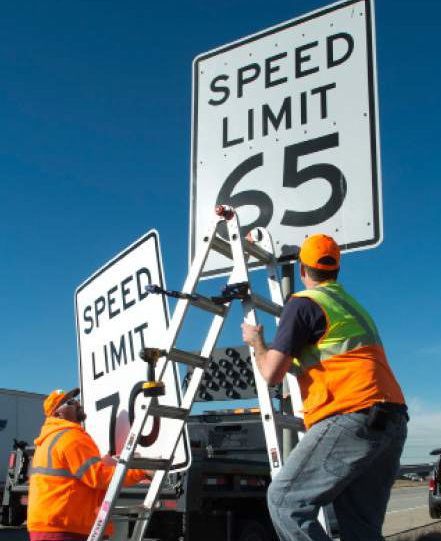 On Tuesday, June 16, the Wisconsin Department of Transportation (WisDOT) began updating nearly 800 miles of highways with new speed limit signs to increase the speed limit from 65 to 70 miles per hour.

Road crews plan to install 470 updated speed limit signs on highways and interstates. The updated signs will only be installed on interstate roadways that have on and off ramps first. A spokesperson for WisDOT stated that additional freeway segments may be updated to 70 mph in the future.

The change comes as a result of the law that Governor Scott Walker signed last month. The new measure allows WisDOT to decide which highways will benefit from posted increased speeds. Wisconsin will become the 39th state in the U.S. to have a maximum speed limit of 70 mph.

-The new speed limit takes effect only when a highway has officially posted the higher speed.

-Be alert and slow down for all roadside workers, as required by the state’s Move Over Law, especially while the new signs are being installed.

Hupy and Abraham urges all motorists to be vigilant of road crews and pedestrians, and to pay attention to changes in speed limits as you drive throughout the state.

If you have been injured in an automobile accident due to the negligence of another, please contact Hupy and Abraham for a free, confidential, no-obligation consultation at 800-800-5678.