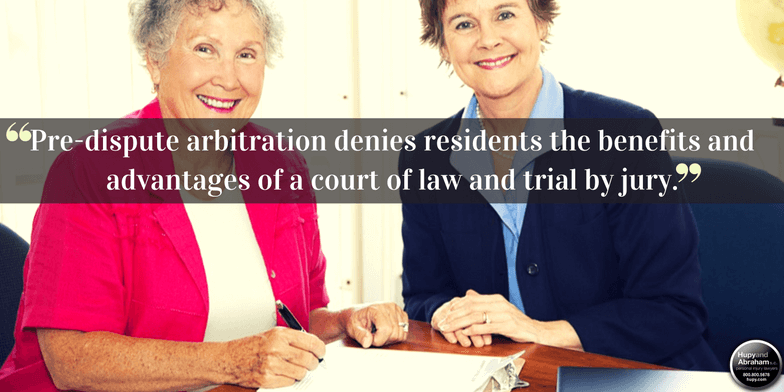 When an individual seeks to become a resident of a nursing home or long-term care facility, there is often an overwhelming amount of admission paperwork to sign. For many years, it was standard practice to find an arbitration agreement hidden among the many admission documents. This committed a nursing home resident to arbitration even before a dispute developed about something as serious as nursing home abuse or neglect.

Arbitration is a form of alternate dispute resolution in which a legal issue is settled outside of court. One or more arbitrators decide the outcome of the case, rather than a judge or jury. Typically, the decision of the arbitrator is binding and cannot be appealed in court.

Why Forced Arbitration Agreements at the Time of Admission Are Unfair

Signing an arbitration agreement at the time of admission…

However, since this practice of required arbitration agreements became standard in most nursing homes, many nursing home residents were left with no choice but to agree to arbitration or to forego the nursing home care they need.

What Does All of This Mean If Your Loved One Has Been Hurt?

Regardless of whether or not your loved one signed an arbitration agreement, it is important to talk to an experienced lawyer about any allegations of nursing home abuse or neglect. Your loved one has suffered real damages because of an action (or inaction) that never should have happened. We want to help you protect her rights. Please call us anytime—24/7/365—at 1-800-800-5678 or via this website to learn more about how nursing home abuse and neglect cases work and about your loved one’s possible recovery.