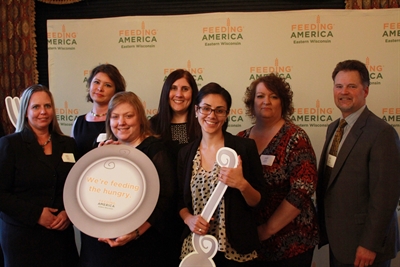 On June 11, 2014, the personal injury law firm of Hupy and Abraham, S.C. continued its tradition of giving back to the community by sponsoring Feeding America Eastern Wisconsin’s “Eighth Annual Grateful Plate” fundraiser.

TV personality Tiffany Ogle, host of “The Morning Blend,” served as the emcee for the event and Bonnie Bellehumeur, President of Feeding America Eastern Wisconsin, addressed the crowd of over 300 people explaining how they feed over 330,000 people each year.

Supporters like Hupy and Abraham, S.C. enable Feeding America Eastern Wisconsin to turn one dollar into five meals, which is crucial because demand has increased 35% in the past year. Each year, they distribute more than 18 million pounds of food through warehouses in Milwaukee and Fox Valley.

Prior to the event, we received the following note:

Please accept my heartfelt thanks for your generous sponsorship donation to "Grateful Plate 2014." In addition to raising funds, this event builds awareness of the problem of hunger in our community. Thank you for understanding that need and responding with your continued support.

Thanks again for sharing our belief that no one should go hungry.

Hupy and Abraham, S.C. has loyally supported Feeding America Eastern Wisconsin through the years and also celebrated the holiday season by donating meals to the needy.