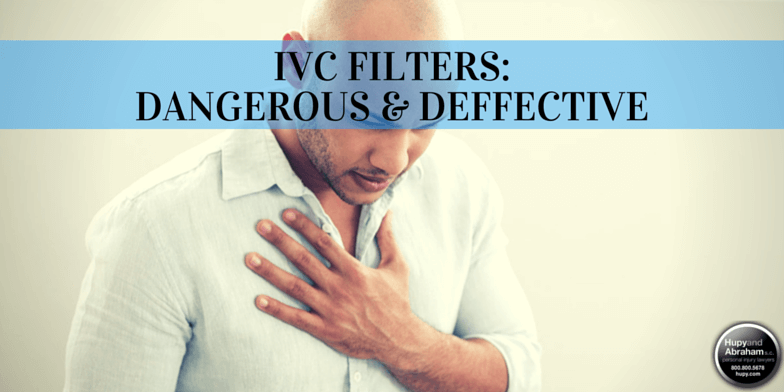 If you, or someone you love, has an IVC filter to prevent blood clots, you, and they, might not have known that it could cause serious complications. And unfortunately, those complications could be much worse than the clots the filter was designed to prevent.

IVC filters are small surgical devices used to protect individuals at risk for post-surgical pulmonary embolisms. Once inserted into the inferior vena cava (IVC) vein, the small filter is meant to make a patient’s blood flow normally and prevent potential blood clots from migrating to the heart, lungs or brain. When a patient has fully recovered, the IVC filter is typically removed or “retrieved.” However, studies have shown that one popular IVC filter is highly defective and is allegedly responsible for 39 deaths in the U.S. alone.

For an IVC filter to work properly, it needs to stay intact, in place, and eventually be safely removed. If it does not work properly, the device has been shown to:

Manufacturers Cook Medical and C.R. Bard were the first to sell these retrievable IVC filters in 2002 after questionable approval. But not before the “Recovery IVC Filters” were rejected twice by the U.S. Food and Drug Administration (FDA).

Since then, 39 men and women have died due to alleged complications caused by IVC filters, and over 900 reports of serious complications have been submitted to the FDA.

Multiple studies have also suggested that these “retrievable” IVC filters were never proved to be safely removable at all. Yet the manufacturers continued to market the product for over 10 years without issuing a recall. It is believed that Bard was even aware of these concerns before the products went to market. In 2005, Bard replaced the “Recovery” with modified “G2 series” filters that also generated hundreds of complaints.

What Should I Do?

If you or someone you know has suffered due to an IVC filter, call the class action lawyers of Hupy and Abraham at 800-800-5678, or start a live chat with them anytime at Hupy.com. Our legal team has decades of experience with these types of cases, and will get you the financial compensation you deserve.