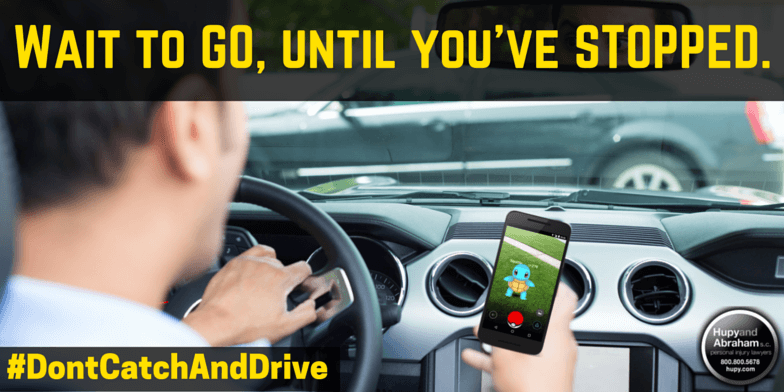 Inspired by the Pokemon Company's franchise, a location-based phone app called "Pokemon Go" has been rapidly gaining popularity since its recent release. The game’s call to action has users walking around in the real world catching Pokemon. Many hazards and safety concerns have appeared with these creatures.

At the law firm of Hupy and Abraham, S.C., we want all Pokemon trainers to enjoy playing this game, but also to follow these tips while playing:

Be aware of your surroundings.  Travel in pedestrian-friendly areas, and remain mindful of obstacles in your walking path. Report a dangerous area in the Pokemon Go app.

Try not to venture into areas alone. Pokemon Go’s allure may make you to want to be the best that no one ever was. However, you still have to be smart about playing. Walk with a friend and tell someone where you are planning to go before you leave.

NEVER play Pokemon Go while driving. Just like posting a status update or texting, catching a Pokemon is considered distracted driving. You are endangering your life and the lives of others when you choose to get behind the wheel and stare at your phone screen instead of the road.

Avoid walking while staring at your phone screen. It isn’t necessary to continuously stare at the game while walking. As long as your app is open, the game should notify you when things are near. If you MUST look down at your phone, step to the side and make sure you are not walking into an intersection.

Have fun. Pokemon Go has already brought nostalgia and happiness to a lot of people in the short time since its release.

The law firm of Hupy and Abraham bids all trainers to have a safe adventure!