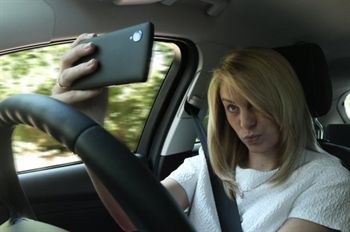 Though most social media trends are innocent enough, “car selfies” pose more danger than they’re worth. According to a Ford study, 33 percent of drivers in the United States have taken pictures of themselves while driving.

As most social media users can attest, holding a camera (typically a smartphone) away from your body and taking a picture of yourself is known as a “selfie.” There’s nothing wrong with taking selfies … unless you’re driving.

A growing number of celebrities, teens and ordinary people are taking “car selfies” and sharing them on social media. To erase any doubt as to whether they’re actually driving or just sitting in their car, thousands have added hashtags such as #drivingselfie, #EyesOffTheRoad and #IhopeIdontcrash.

This reckless fad isn’t confined to automobile drivers. People are doing the same thing while operating motorcycles, boats and even planes.

Not only is this irresponsible in terms of the driver’s well-being, people who participate in this trend are also putting others at risk. And by sharing “car selfies” on social media, they’re encouraging others to do the same by making it seem cool.

This trend is especially hazardous for teens. Being the least experienced drivers on the road, teens should pay extra attention while driving. But the teenage demographic’s fascination with social media and smartphones is not a good combination while driving.

According to the National Highway Traffic Safety Administration, car crashes are the leading cause of death for teens and distracted driving plays a role in 12 percent of those fatalities. “Car selfies” are equally as dangerous as texting and driving, which only makes this problem worse.

The car accident attorneys of Hupy and Abraham know the dangers of distracted driving. Our firm is distributing FREE “DNT TXT N DRV” bumper stickers to raise awareness about this important issue.