Do I always have to wear a seat belt in Illinois? 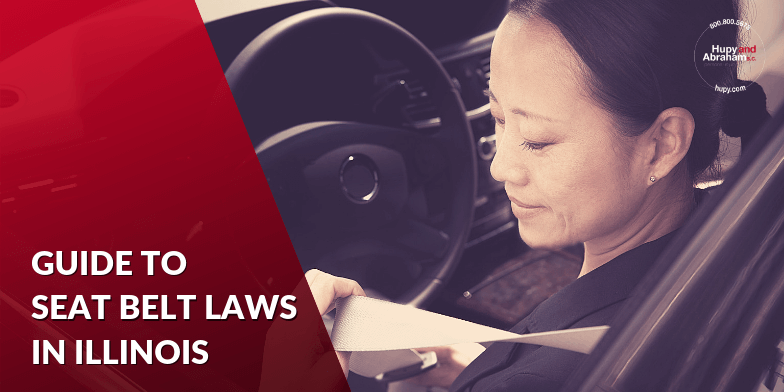 It may surprise you to learn that the answer is no because the safety benefits of seat belts are widely publicized. The National Highway Traffic Safety Administration (NHTSA) estimates that 14,688 lives were saved in 2016 because people wore seat belts in passenger cars. A seat belt can prevent you from being ejected from a car, protect you from airbag injuries, and protect you from fatal, critical, and moderate car accident injuries.

Illinois requires the use of seat belts for most drivers and passengers, but there are exceptions to the law.

When Seat Belts Are Required—and When They’re Not

However, there are exceptions to this general rule. Specifically, drivers or passengers are not required to wear a safety belt in Illinois if:

Other exceptions also apply for mail carriers and emergency vehicles.

The police may check for seat belt use if you are pulled over or if the police are conducting seat belt checkpoints. You may receive a ticket for not wearing a seat belt if you are required to wear one and you are not buckled up. If you are driving with a graduated license and you have more than one ticket for failing to wear your seat belt, then your license may be suspended. However, the police cannot search your car any further unless they have probable cause to do so.

While most drivers and passengers are required to wear seat belts, Illinois law is clear: the failure to wear a seat belt is not evidence of negligence if a crash occurs. A small fine may be imposed for failing to wear a safety belt as required by Illinois law, but you may pursue a car accident lawsuit, and you may still be entitled to car accident damages if you’re hurt. These damages may include compensation for things like past and future medical expenses, lost income, out-of-pocket costs, physical pain, and emotional suffering.

If you were hurt in an Illinois car crash, then we encourage you to reach out to an experienced Illinois car accident lawyer even if you weren’t wearing a seat belt. Our lawyers know what evidence to look for in car accident cases, and insurance companies know that we mean business. We will go above and beyond the call of duty to make sure that you are treated fairly and that you get the damages that you deserve. Call us, text us, or contact us via this website any time—247/365—to learn more about your rights and possible recovery.

Who decides who is at fault for an Illinois car accident and how much they owe?
What is an excluded driver?
Which Illinois counties have the worst speeding problem?
I was unemployed at the time of my auto accident. Can I still recover lost income in a car crash case?
Who's at fault for an Illinois Uber pedestrian crash?
Are some Rockford roads more crowded than others?
Are some roads busier than others in Gurnee?
Win or it is Free Guarantee