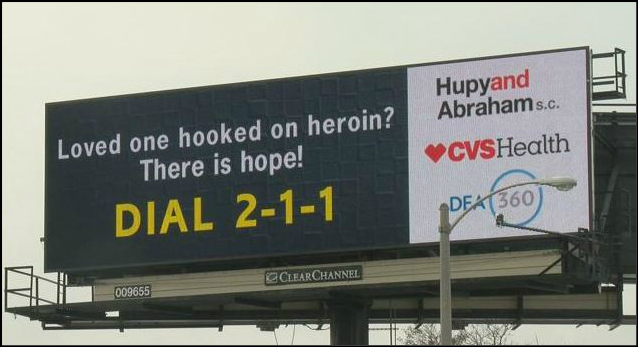 As opioid deaths continue at a record pace in Milwaukee County, Hupy and Abraham is partnering with the Drug Enforcement Administration on a billboard campaign aiming to prevent and treat opioid addiction.

At a December 6 press conference, Attorney Michael Hupy announced the launch of an eight-week billboard campaign that will raise awareness of the dangers of opioid abuse.

“This is the time to take action and to be activists to save our children,” said Attorney Hupy.

The digital billboards alternate between three different slides. One displays the sobering, year-to-date tally of Milwaukee’s opioid deaths. Others encourage parents to warn their children about opioid misuse and prompt people to call 2-1-1 for help.

The billboards reach as far west as Fort Atkinson, as far north as Sheboygan and as far south as near the Illinois border.

According to a report by the Medical College of Wisconsin, opioid-related deaths have risen each of the last four years.  There have been 262 opiate overdose deaths in Milwaukee County so far in 2016. There were 231 in all of 2015.

The primary culprits of the opioid epidemic are heroin, fentanyl and prescription drug misuse. Fentanyl abuse has risen so quickly that it’s on pace to take more lives in 2016 than the previous four years combined.

Hupy and Abraham is always working to help the community, whether we’re supporting worthwhile causes or making the streets safer. Attorney Hupy recently awarded $25,000 to an informant who helped solve the cold case of Laylah Petersen, a 5-year-old girl who was murdered.