Nursing Homes Can No Longer Deny Victims Their Day in Court 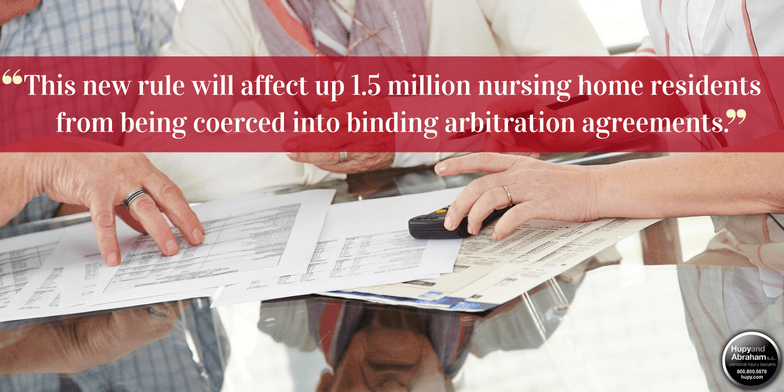 For years, many vulnerable residents of nursing homes and other long-term care (LTC) facilities have fallen victim to what are known as “binding arbitration clauses” that strip residents of their right to representation in a court of law. Now, the Centers for Medicare and Medicaid Services (CMS) has issued a ruling that will prevent nursing homes that receive federal funding from requiring residents to resolve issues, such as allegations of abuse or neglect, in arbitration instead of in court.

This new rule will affect up 1.5 million nursing home residents from being coerced into binding arbitration agreements. These (often difficult to spot) clauses have historically been used to deny injured residents and their families the right to litigate a case against the facility and responsible parties in a court of law.

Why Else is Binding, Pre-Dispute Arbitration Harmful?

Three Things to Keep in Mind:

At Hupy and Abraham, we believe in fighting for the rights and dignity of victims of nursing home abuse and neglect. If you have any questions about this new ruling or arbitrations clauses in general, contact Hupy and Abraham today. Call 800-800-5678 or start a live chat anytime at Hupy.com.