Hupy and Abraham a Proud Sponsor of Jayden Buckley Racing! 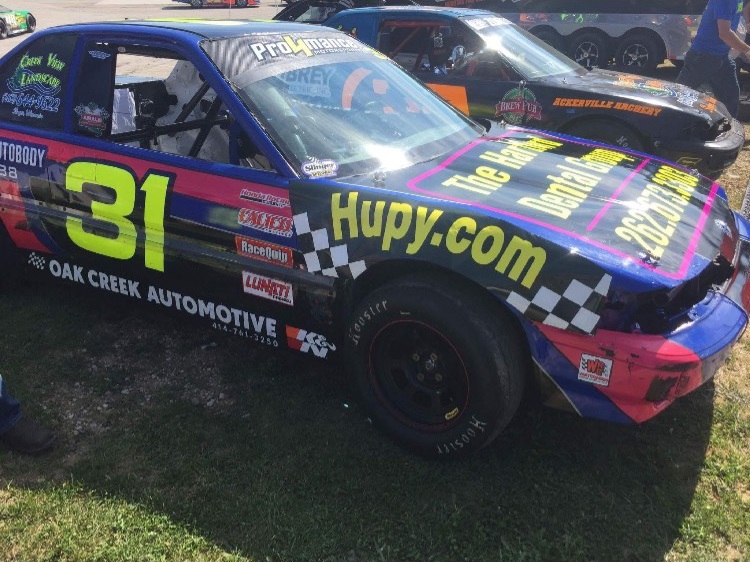 “My goal in racing is to prove people wrong.” Those are the words of 18-year-old, self-proclaimed adrenaline junkie and circle track racer Jayden Buckley about what drives her in her racing career.

Jayden Buckley of Slinger, Wisconsin, started racing just after she turned 14. “I’d never driven a car before, so I wasn’t the greatest driver. People honestly hated me. At least it felt that way, and I was told to quit,” she said. But she never did quit. And today, Hupy and Abraham, S.C. is proud to sponsor Jayden as not just the only female racer at her home track, Slinger Speedway, but also the second-ranking racer in the Slinger Super Beez racing division!

Jayden credits her father, Todd Buckley, as being her role model both on and off the track. “My whole family has a history in racing. My uncle, dad, grandpa and stepfather all race. Four cylinders, snowmobiles, dragsters, you name it.” That family legacy of racing is part of what makes up her race team now. Jayden says her family on and off the track is a significant part of her career success so far, stating, “I have a large racing team that helps me keep my head held high. I wouldn’t ask for any other people to be beside me.”

Typically racing over 20 times a year in her Hupy and Abraham-sponsored Acura Integra, Jayden’s home track is the “World’s Fastest Quarter Mile Oval,” Slinger Speedway, in Slinger, Wisconsin. Occasionally, she and her team will also race at the Dells Raceway Park, and Jefferson Speedway. When asked what her advice would be to any other females interested in getting on the track, Jayden responded, “Just do it. No matter what people say to bring you down, you just have to keep your head up, make the leap and just do it.”

At Hupy and Abraham, we are proud to sponsor racers like Jayden Buckley, and are proud to have supported the communities in Wisconsin, Illinois and Iowa for over 50 years! Through our various safety campaigns and PSAs, we have spread important safety messages like “Watch for Motorcycles,” “Yield to Pedestrians” and “DNT TXT N DRIVE” to hundreds of thousands of people over the years. To get YOUR free stickers, click here!