Firing of Officer Involved in Shooting 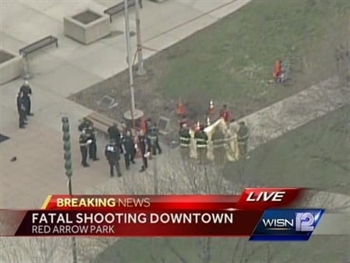 The firing of Christopher Manney, the officer responsible for the Red Arrow Park shooting, doesn’t seem to have satisfied anyone. Not the victim’s family, who want Manney to go to jail, nor fellow officers, who believe he should keep his job, and certainly not Manney himself.

31-year-old Dontre Hamilton was shot 14 times at Red Arrow Park in Milwaukee by Officer Christopher Manney. During a pat-down search, Hamilton grabbed Manney’s baton and allegedly beat him over the head with it. This prompted Manney to shoot and ultimately kill Hamilton.

The decision to fire Manney had nothing to do with killing Hamilton. Milwaukee Police Chief Edward Flynn fired Manney because his pat-down search violated MPD protocol. Manney’s use of deadly force was deemed justified.

Manney has appealed his firing and could get his job back. He’s also applied for duty disability retirement benefits, meaning he could get paid for the rest of his life to do nothing even though he’s able-bodied and suspected of committing a crime.

At a recent meeting of the Milwaukee Fire and Police Commission, both sides voiced their displeasure. Hamilton’s family, and other supporters, are appalled that Manney is appealing his firing. They contend he deserves to be in jail, much less working as a police officer.

Those in the community who wish to see Manney criminally prosecuted are awaiting a decision from the Milwaukee District Attorney. The DA’s office has reported that the FBI is also investigating the incident. But even if Manney is charged and convicted, he’ll still get his duty disability retirement benefits if they’re approved.

The Milwaukee Fire and Police Commission has received six previous complaints about Manney, but he is still being supported by many of his peers. Some officers feel that it was unjust to fire him for a simple pat-down search. They claim every officer does this and Milwaukee Police Association President Mike Crivello calls the firing “unprecedented.”

When it’s all said and done, there’s no resolution that could possibly please everyone. Some think it’s ridiculous to fire Manney for a simple pat-down search. Others point out that shooting someone 14 times would surely have landed him in jail if he weren’t a police officer.

Still, the question that needs to be answered is why Manney fired as many shots as he did. It would be one thing if he killed Hamilton with a single gunshot, but you can’t possibly shoot someone 14 times from point blank range without intent to kill.