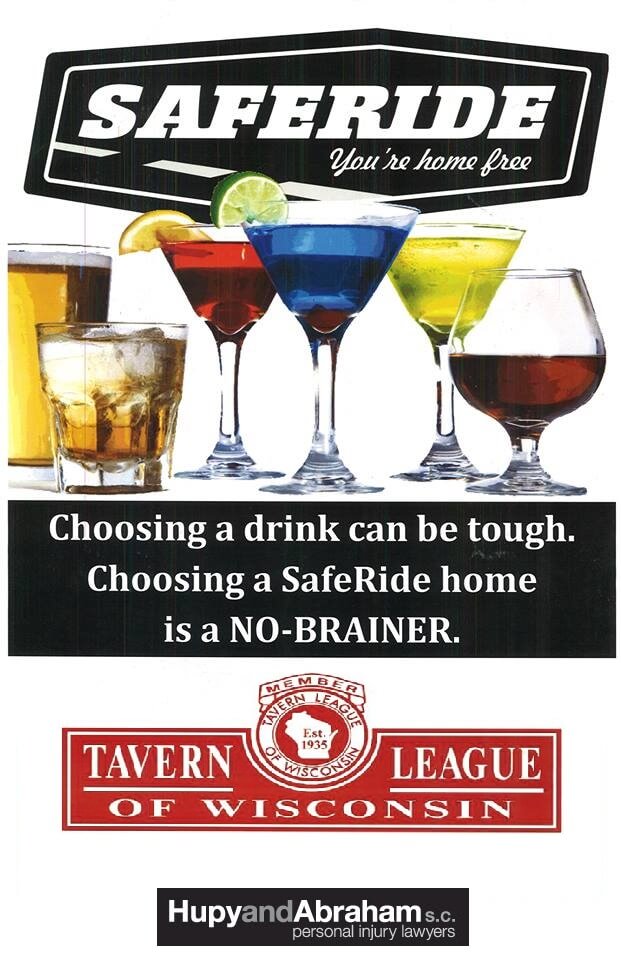 For the third year in a row, Hupy and Abraham is excited to renew its commitment to supporting the Tavern League of Wisconsin’s SafeRide Program.

The state of Wisconsin reports some of the highest numbers of drunk driving incidents in the nation, with nearly 5,000 alcohol-related crashes occurring last year. Many Wisconsin residents may not know that the SafeRide program has been operating since 1985, offering free rides home to patrons of participating bars, taverns, pubs, nightclubs and restaurants in 60 of 72 Wisconsin counties.

SafeRide is funded by the Tavern League of Wisconsin, the Wisconsin Department of Transportation and Hupy and Abraham as the sole corporate sponsor. Some funding is also received from fines collected from those who are convicted of drunk driving.

Anyone at any time may use SafeRide. A patron who has been drinking must simply inform a waitress, server or bartender of a participating establishment that he or she is in need of a ride. The bartender will call a cab and give the patron a voucher that the cab company can later reimburse at the local Tavern League.

In recent years, SafeRide has grown dramatically, and the success of the program has contributed to a nearly 50 percent reduction in OWI fatalities in the last 10 years. In 2015, nearly 1,000 rides were provided by SafeRide to Milwaukee County residents, making it another year of growth for the program.

Hupy and Abraham also promotes several programs to bring awareness to distracted driving, including driving under the influence and texting while driving. Join others who are committed to safe driving, click here to take the “DNT TXT N DRV” pledge today.