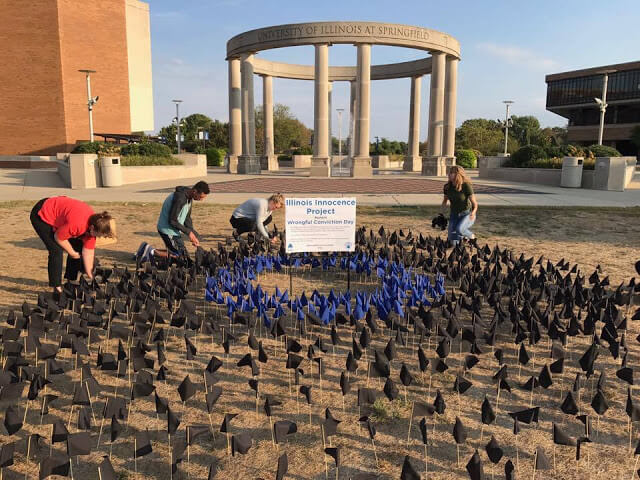 Hupy and Abraham is a proud supporter of the Illinois Innocence Project, an organization dedicated to providing legal aid to innocent people facing wrongful convictions throughout the state of Illinois.

Recently, firm president Attorney Michael Hupy received a thank you from the organization for his support during the Covid-19 pandemic. In the letter, Executive Director John Hanton explained what it means to support the freeing of innocent people, especially during this difficult time:

“Our clients are trapped behind bars as COVID sweeps thought Illinois prisons. These innocent women and men should not be incarcerated to begin with. Now many of them face potential death sentences if they are exposed to the virus.

We’ve been advocating tirelessly for their protection and, where possible, their release.

Your support this past year helped us bring home FIVE clients since April. This rate of release is unprecedented.”

One of the five recent exonerees, 50-year-old Marilyn spent 28 years in prison after being convicted of a murder she did not commit and was sentenced to death (later commuted to life without parole). During a 20-hour interrogation, Marilyn was denied sleep, threatened physically, and told her children would be taken from her. In April, Governor J.B. Pritzker commuted her life sentence in response to a request for an expedited ruling on our clemency petition, argued last fall, due to the pandemic.

The Illinois Innocence Project was developed in 2001, as part of a nationwide network of groups, and has won freedom for 17 innocent people. The Project reviews more than 300 requests from Illinois inmates each year, with staff comprised of undergraduates, law students and lawyers working toward the common goal of legally pursuing innocence claims.

An advocate for doing what is right for local communities, firm president Attorney Michael Hupy was voted Top Local Activist by the Milwaukee public. The firm’s mission is doing well by doing good and, helps people and organizations like the Illinois Innocence Project, achieve that goal.

Visit https://www.uis.edu/illinoisinnocenceproject/ to learn more about the University of Illinois–Springfield’s Innocence Project and how you can lend your support.

Love For the Community
Upcoming Events: Where to Find us This February
Hupy and Abraham Joins Feeding America’s PB&J Challenge Kickoff with Milwaukee Bucks Star Bobby Portis Jr.
Hupy and Abraham and the Milwaukee Admirals
Hupy and Abraham, S.C. Gives Back $11,000 this Thanksgiving to Organizations Supporting Families in Need
COA Family of the Year Luncheon 2022
Hupy and Abraham Honors Veterans
Win or it is Free Guarantee