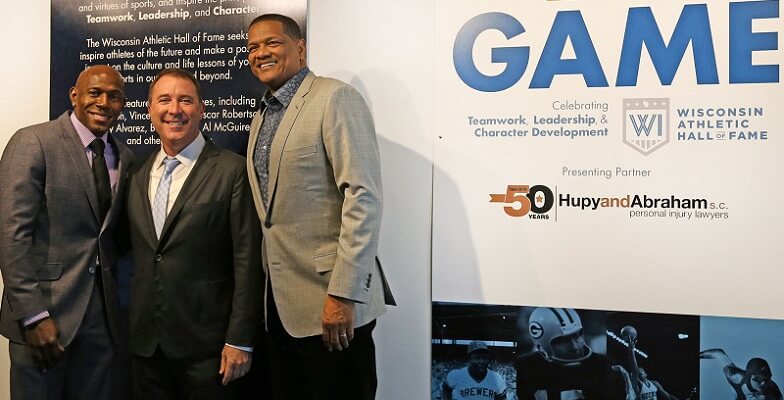 Hupy and Abraham is proud to announce its partnership with the Wisconsin Athletic Hall of Fame as the organization presents a new exhibit at Milwaukee’s Discovery World.

The “Get in the Game” project allows attendees to learn more about Wisconsin’s greatest athletes in history, and all of their achievements. It includes interactive elements such as the “Lambeau Leap” and the famous “Sausage Race.” Hupy and Abraham made the choice to support the sports endeavor as part of the upcoming 50-year celebration.

Hupy and Abraham, a personal injury law firm, has its roots beginning in 1969. Attorney Lloyd Barbee, known for starting the Milwaukee Public Schools Integration Lawsuit, began working with Attorney Thomas Jacobson in 1969. Jacobson went on to work at a law firm, which was named Jacobson and Hupy, S.C. by his exit in 1997.

As the presenting sponsor, Hupy and Abraham has a section in the exhibit commemorating the firm’s milestone and commitment to the community. The firm’s display features pictures of employees at community, volunteer and charity events, as well as information about Hupy and Abraham’s corporate philanthropy and civic engagement.

Managing Partner Attorney Jason Abraham had this to say about the new display, “We are so grateful to sponsor this amazing exhibit. When the Wisconsin Athletic Hall of Fame asked us if we could help make an exhibit that would help kids get more involved with and see the great things in sports we said, ‘Absolutely!’”

Wisconsin is the first state to create a sports Hall of Fame solely comprised of its own sports players. The “Get in the Game” exhibit will run until April 30, 2019.