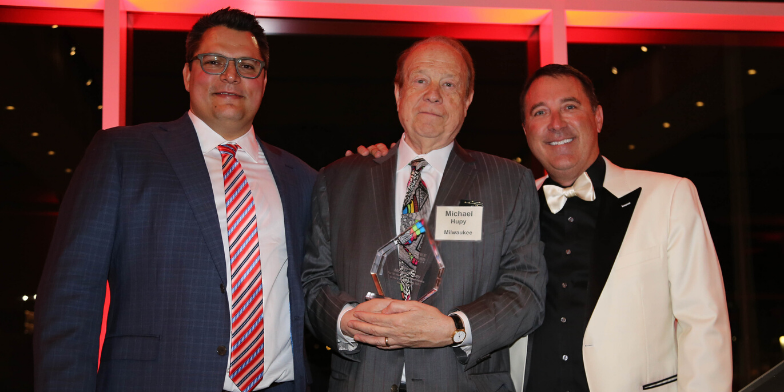 Hupy and Abraham closed out its 50th anniversary with an annual holiday party with 309 attendees that doubled as a company celebration: an unofficial ending to the milestone year. The event followed celebrations held earlier in the year, which included a new website rebrand, multiple charity functions and the mayor of Milwaukee proclaiming April 15, 2019, as “Hupy and Abraham” day.

The roots of Hupy and Abraham can be traced back to 1969, with activist and attorney Lloyd Barbee. Attorney Barbee was an influential lawyer, activist and executive member of the Milwaukee NAACP. He is best known for starting the Milwaukee Public Schools Integration Lawsuit. Attorney Michael Hupy joined the firm in 1989, and in 1997 he bought out his partner and the firm was called Michael Hupy and Associates. Attorney Jason Abraham joined in 1993, and later became shareholder and the firm’s name was changed.

The firm’s current “Hupy and Abraham” officially became the company’s name in 2006. In the past 50 years, the company has transformed from a single small law firm to 11 offices and nearly 200 employees dispersed throughout Wisconsin, Illinois and Iowa. Its staff has won over 250 awards and has obtained over $1 billion for more than 70,000 injured clients.

Additionally, Firm President Attorney Michael Hupy celebrated 30 years with the firm at the company’s annual holiday party. He announced and gave a surprise gift: 10 employees would receive $3,000 from him personally, totaling $30,000. Along with milestone service awards, that was one of the many ways Hupy and Abraham staff were shown appreciation from the owners.

Hupy and Abraham has proven time and time again that it is a leader within its communities throughout Wisconsin, Illinois and Iowa. Both Attorneys Hupy and Abraham have put a large emphasis on “doing well by doing good” and giving back to the community after achieving successes. Putting that into practice, firm employees have made it a tradition to select a local organization to support as a gift back to the company’s owners. This year had Hupy and Abraham staff fully involved with a Habitat for Humanity home. Over the course of several months, a house was built for a single mother and her special needs daughter. The option to donate time, money or both was given, and the project was completed smoothly.

Voted best by the public and rated best by legal peers, Hupy and Abraham has made a name for itself in the last five decades. The law firm will continue to provide outstanding service for clients and being a champion in the community however it can. Bigger and brighter things are ahead for our clients and communities, in 2020 and the years beyond.