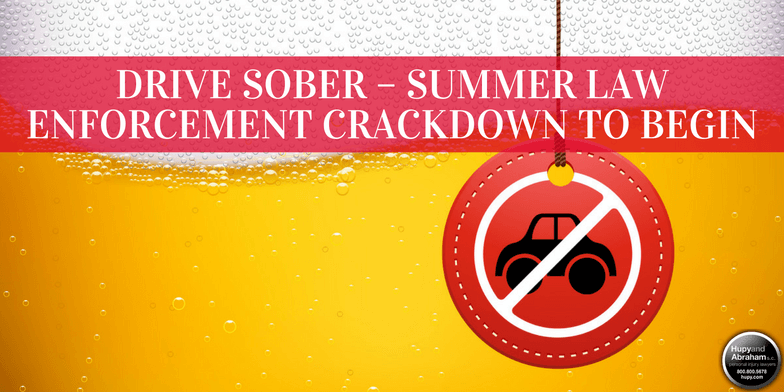 The 2016 national law enforcement crackdown campaign, "Drive Sober or Get Pulled Over," goes into effect across the country from August 17 to September 5, 2016.

According to the National Highway Traffic Safety Administration (NHTSA), the weeks before and the weekend of Labor Day witness some of the worst drunk-driving accidents. To curb this dangerous trend, local law enforcement will partner with the NHTSA in this campaign to reduce drunk driving as summer comes to a close.

During “Drive Sober or Get Pulled Over,” local law enforcement will show zero tolerance for drunk driving. Increased state and national messaging about the dangers of driving drunk, coupled with sobriety checkpoints and increased officer presence on the road, hope to drastically reduce drunk driving during the busy end-of-summer weeks.

Drunk-Driving Facts from the NHTSA:

These figures from the NHTSA exemplify the serious nature of distracted and intoxicated driving. Everyone has the ability to help end these preventable deadly accidents. Remember that buzzed driving is drunk driving and there will be zero tolerance for impaired driving in the coming weeks.

At Hupy and Abraham, we’ve represented numerous victims of drunk-driving accidents. If you or a loved one is injured in an accident due to the negligent actions of an intoxicated driver, contact Hupy and Abraham anytime with your questions. Call 800-800-5678 or start a live chat 24/7 at Hupy.com.

Motorcycle Theft Prevention
Drunk Drivers Make 4th of July Deadliest Holiday of the Year
Don’t Rely On Luck – Tips for a Safe Saint Patrick’s Day
Happy Umbrella Day! 5 Reasons You Need Umbrella Insurance
Five Simple Ways to Make Your Home Safer in 2017
Thanksgiving is the Most Dangerous Travel Period of the Year
The Scariest Thing about Halloween: Pedestrian Accidents
Win or it is Free Guarantee