Women: The Most Frequent Victims of Elder Abuse 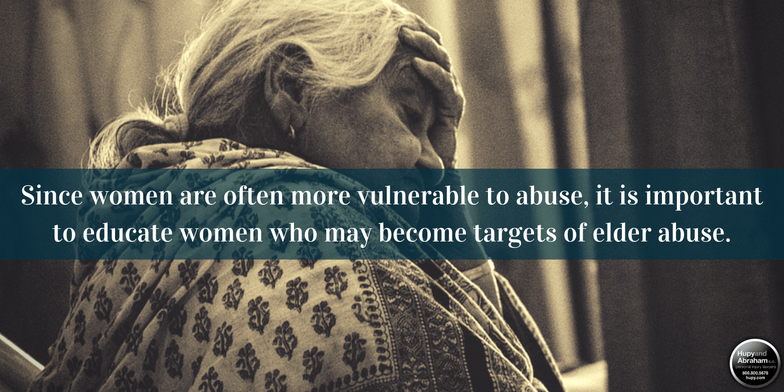 In the United States, men live about seven fewer years, on average, than women. And according to the Assisted Living Federation of America, assisted living communities have a 7-1 ratio of women to men, and a 10-1 ratio in nursing homes.

Why is this relevant?

When considering the issue of female elder abuse and neglect in nursing homes and long-term care facilities, it’s no surprise that approximately 67 percent of elder abuse victims tend to be women. While this population discrepancy partially explains the link between abuse and gender, a skilled nursing home abuse and neglect attorney understands there are also risk factors that may make women more prone to elder abuse than men.

Risk Factors for Abuse and Neglect of Women:

Disabilities: Women are more likely than men to suffer from debilitating forms of Dementia or Alzheimer’s disease. As a result, these elderly women are often victims who cannot report neglect from staff, or abuse from staff or fellow residents.

Sexual abuse: Unfortunately, at any age, women are more likely to be victims of sexual abuse, and this is no different in nursing homes or long-term care facilities.  A study by the Journal of Elder Abuse and Neglect found that elderly women are six times more likely to be sexually abused than men of the same age.

Understaffing: Another risk factor that affects both men and women is understaffing. Studies have shown that nearly 95 percent of nursing homes are likely understaffed, contributing to an inexcusably higher number of elderly women who suffer from abuse and neglect when overworked or underqualified staff provide inferior care, or are unable to properly supervise residents.

Since women are often more vulnerable to abuse, it is important to educate women who may become targets of elder abuse. If you discover that your mother, grandmother or other loved one has been the victim of nursing home abuse or neglect, the experienced nursing home abuse and neglect attorneys of Hupy and Abraham are here to help. If you have any questions or are interested in a free consultation, contact us anytime at 800-800-5678, or simply start a live chat right now at Hupy.com.