5 Common Excuses for Not Wearing a Seat Belt 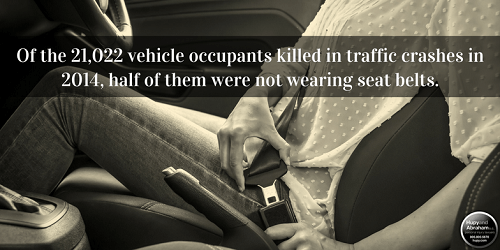 We all know seat belts save lives when utilized correctly. Yet somehow, the NHTSA reports that of the 21,022 passenger vehicle occupants killed in traffic crashes in 2014, half of them were not wearing seat belts.

So, why do so many people still fail to buckle up? Despite the risks, possible fines and potential loss of life, it turns out people have a variety of excuses.

The 5 Most Common Excuses for Not Wearing a Seat Belt:

These excuses can all be debunked or remedied in some way, because there is never a reason to travel without a seat belt. In the last decade, seat belts saved the lives of more than 100,000 people in the United States. And during high-traffic holiday periods, seat belt usage is more important than ever. Whether you’re traveling across town or across the country, it’s essential to always wear a seat belt.

The car accident attorneys at Hupy and Abraham wish you and your family a festive and safe holiday season. But in the event that you or a loved one is injured due to the negligent actions of another driver, we’re here to help 24/7. Contact us at 800-800-5678 or start a live chat anytime at Hupy.com.

5 Most Common Summertime Injuries in Milwaukee
What Happens When Teens Suffer Traumatic Brain Injuries
Important Information for Intracranial Hematoma Sufferers in Wisconsin
Can You Legally Break a Window to Save a Dog?
POLL: How Safe is the New Milwaukee Streetcar?
Types of Injuries That May Be Suffered in Wisconsin Accidents
What Happens After an Amputation Injury
Win or it is Free Guarantee