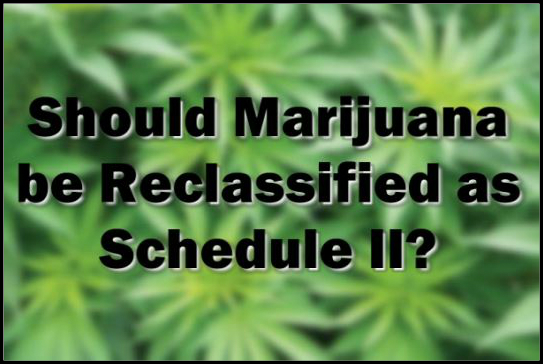 During an appearance in South Carolina, presidential candidate Hillary Clinton endorsed reclassifying marijuana from Schedule I to Schedule II, which would acknowledge its medicinal value. Under current regulations, marijuana is considered a Schedule I substance, indicating it has a high potential for abuse and no accepted medicinal value.

Clinton is expected to be a serious contender in the next presidential race. Other presidential candidates are also in favor of reclassification.

So if you’re in favor of marijuana legalization, this is good news, right? Not necessarily.

Currently, people who use medical or recreation marijuana can still be prosecuted under federal law as a “marijuana offender” even if they’re in compliance with state law. Reclassifying marijuana into Schedule II would fix that for medical users, but not recreational.

The only way to spare recreational users the possibility of federal charges would be to completely remove marijuana from the Controlled Substances Act.

The main reason Clinton wants to reclassify marijuana into Schedule II is so that federal funding can be used to research it. In theory, that would make it safer.

By the same token, if federal funding is used for research, marijuana distributors will also be required to get federal approval through the FDA. Ironically, since marijuana currently has no “accepted” medicinal value in the eyes of the federal government, manufacturers don’t have to clear federal regulation hurdles.

If the federal government “accepted” marijuana’s medicinal value, marijuana distributers would have to clear all the same federal regulations pharmaceutical drugs are subjected to. This process would cost millions and drive up the cost, perhaps making it too expensive for some who need it.

In the end, if marijuana is reclassified, medical users will be protected from federal charges, but it might become too expensive for them to use it in the first place. With that in mind, would reclassifying marijuana as a Schedule II substance really be a good thing?

Attorney Michael Hupy was more than 30 years ahead of Hillary Clinton on this issue. In 1982, Attorney Hupy presented evidence in court that proved marijuana is misclassified as a Schedule I substance.